REPLY & QUOTE
Pave-Hawk (iain) says
So far my attempts at making a skull suitable for my cog are 0 from 4. Two failed blobs of paper mache that still aren't dry 4 days later because it's so cold and wet, and 2 overly complicated paper craft skulls that have wasted around 8 hours of cutting and glueing time.
I have found a simplified paper skull that hopefully will be easier and quicker to assemble, otherwise I may have to wait till October in hopes of a suitable plastic skull finding its way on to store shelves locally.

I chose these guys, mostly because I wanted to have a go at painting the wolves, I have never had much luck with fur before I built tie Wolf Lord pictured at the top of my first thread.


so on to the this challenge.


Great builds going on, have enjoyed reading so far.

REPLY & QUOTE
Pave-Hawk (iain) says
Picture taken in darkness as the power just went off so construction had to stop, but here's my skull so far. 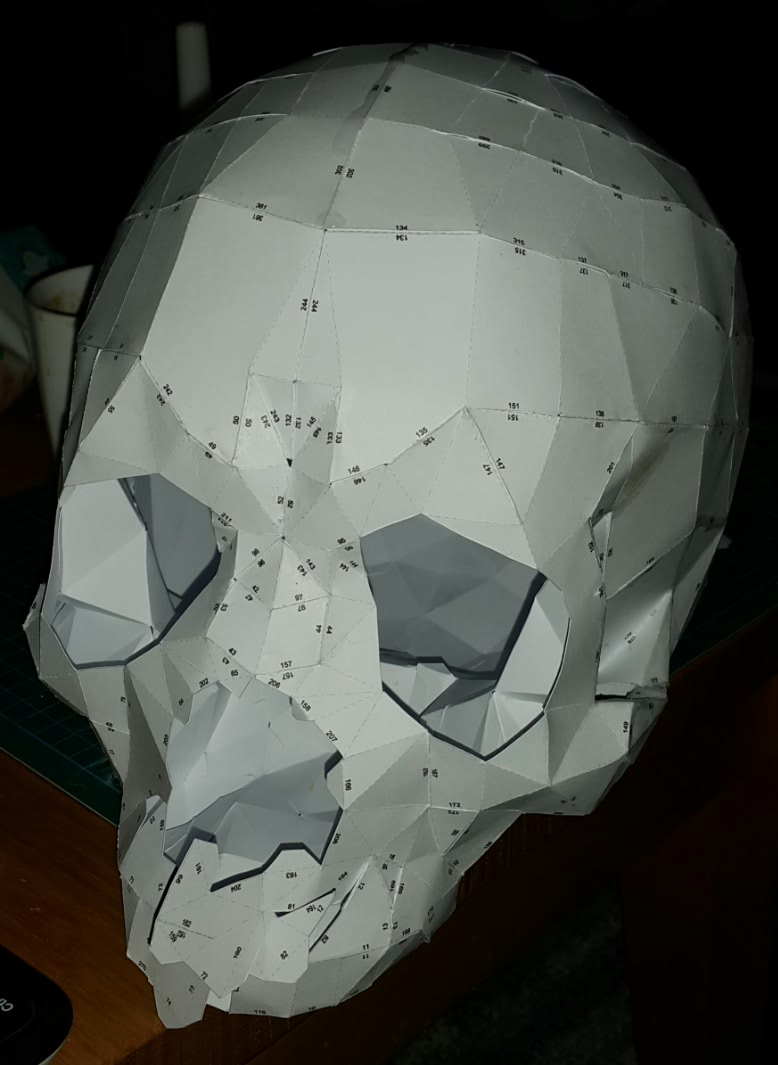 REPLY & QUOTE
RedDuster (SimonHeathwood) says
Painting the wolf, this one will be grey,

Base coat on, and a darker patch airbrushed. 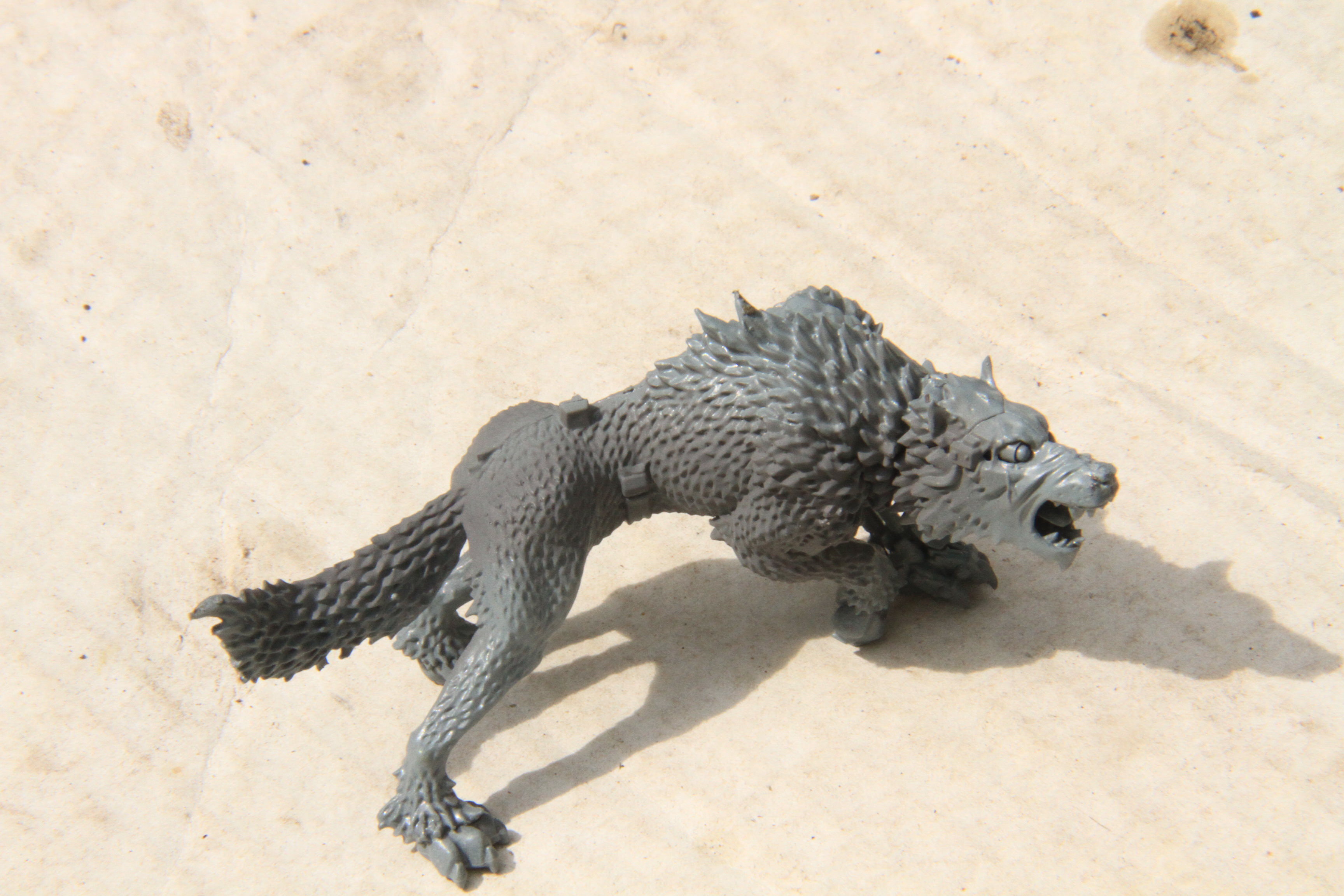 Darkest coat on and ready for drybrushing ad washing. 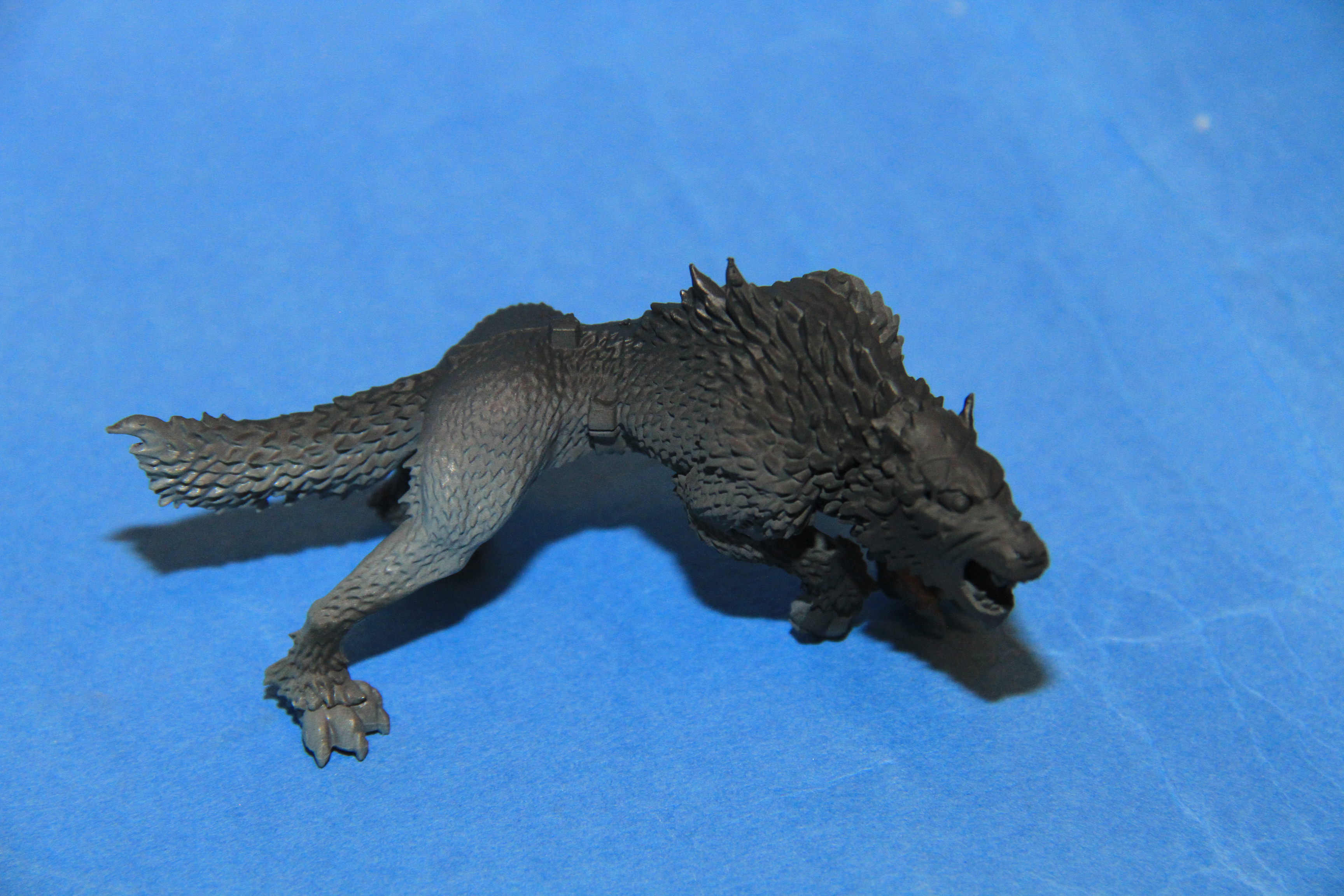 Frist bit of drybrushing, and the cybernetics base coated. 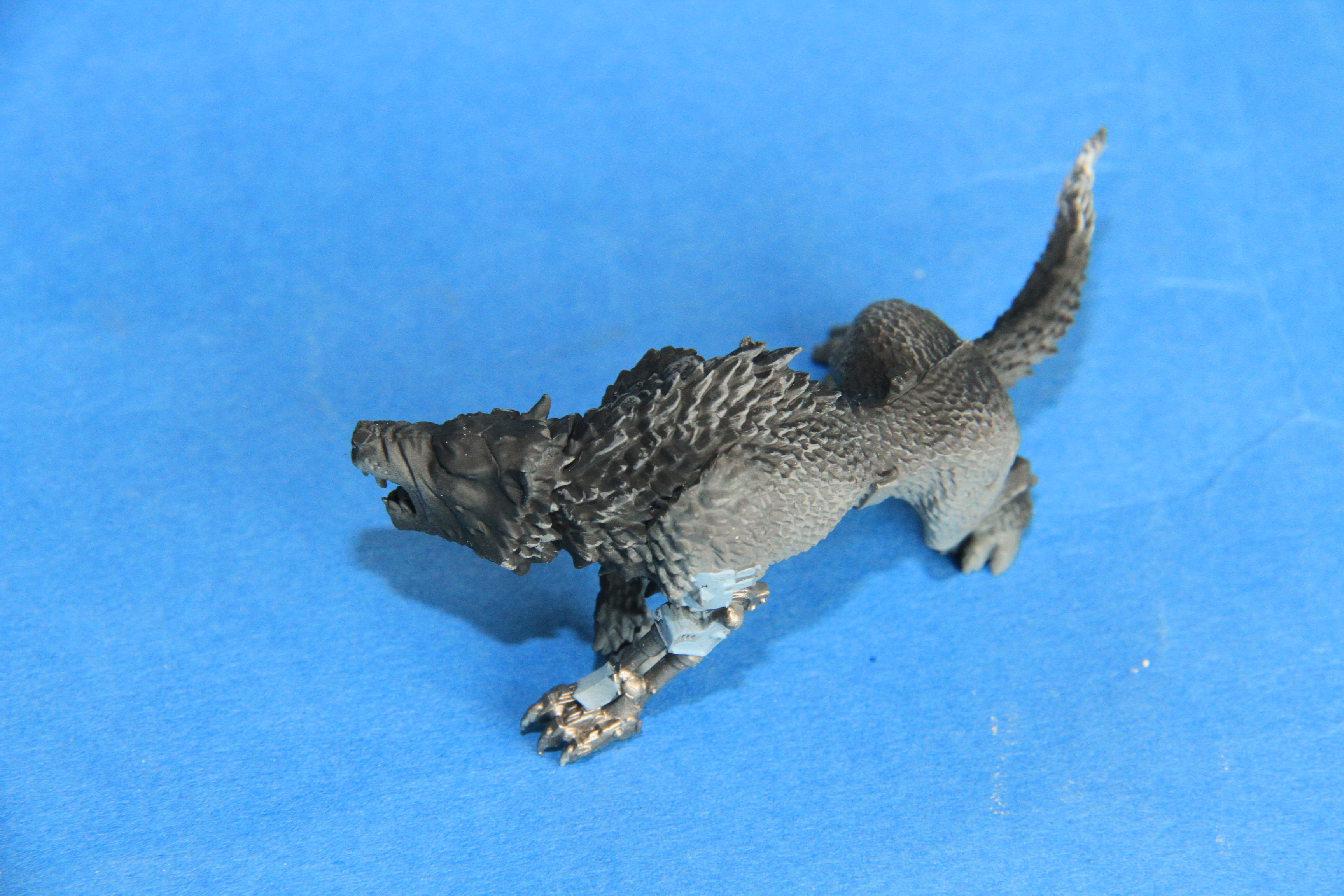 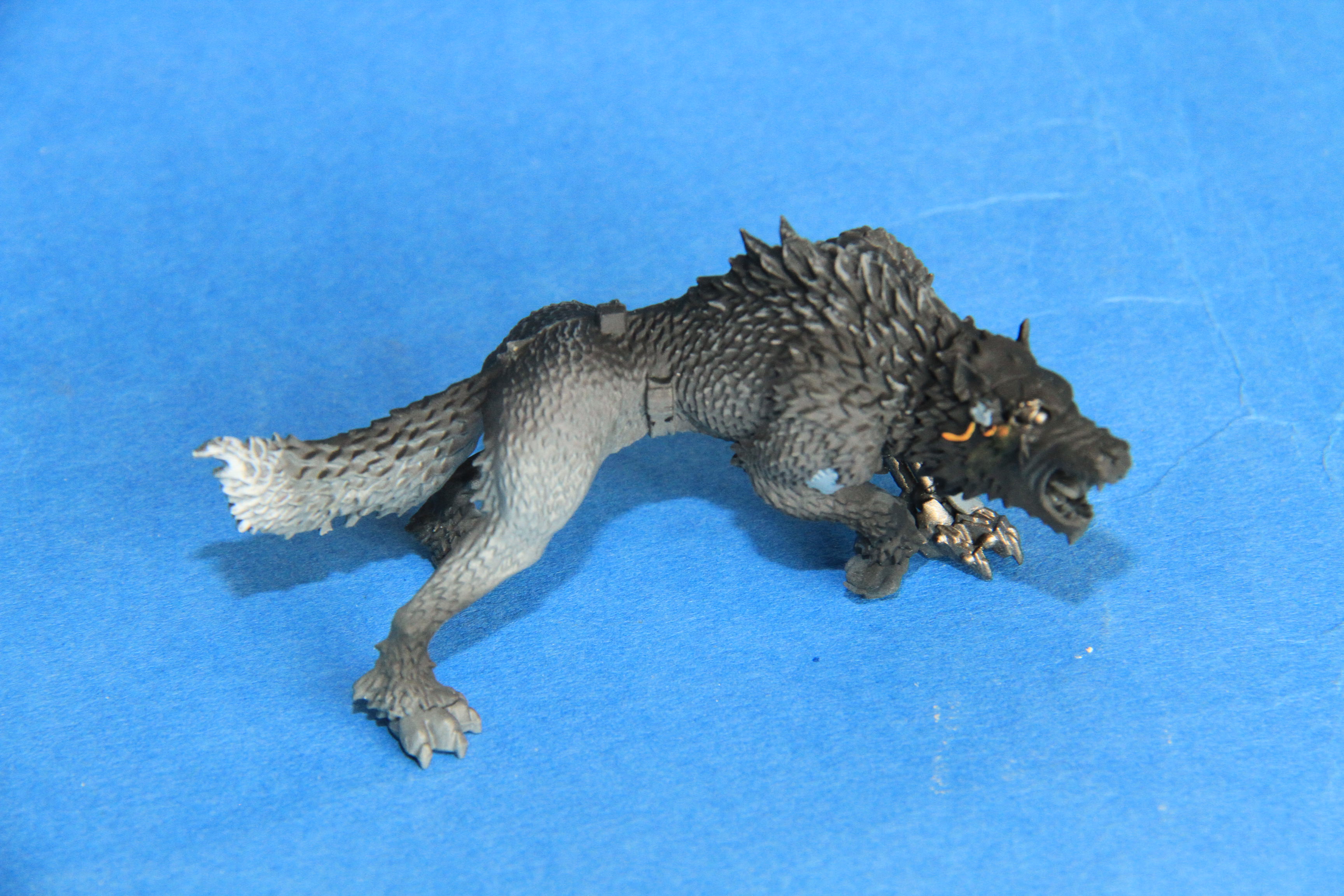 REPLY & QUOTE
PasiAhopelto (Pasi Ahopelto) says
Originally I planned to use variation of Berlin Brigade camouflage with different colours, but somehow it turned to blotches of grey, green grey and brown followed by washes of greys, stone grey, bright orange and medium grey: 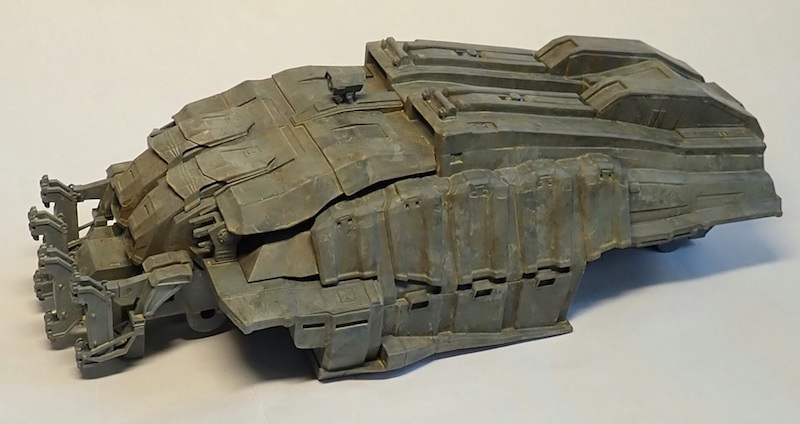 REPLY & QUOTE
Pave-Hawk (iain) says
Kind of messed up what I wanted, but going to stick with it.

Routed a circular depression in the cog where the skull will sit. 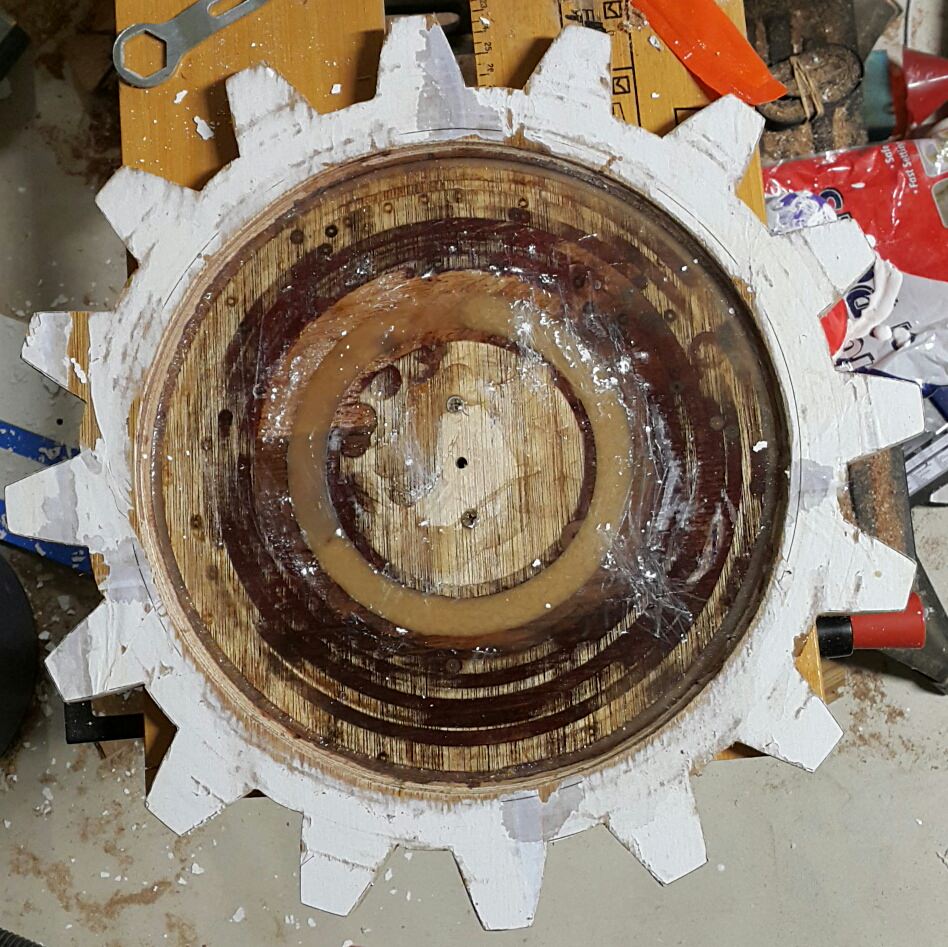 Finished the papercraft skull, gave it a resin slush cast to reinforce the structure, and have added the left eye socket, and right eye base from air dry clay. 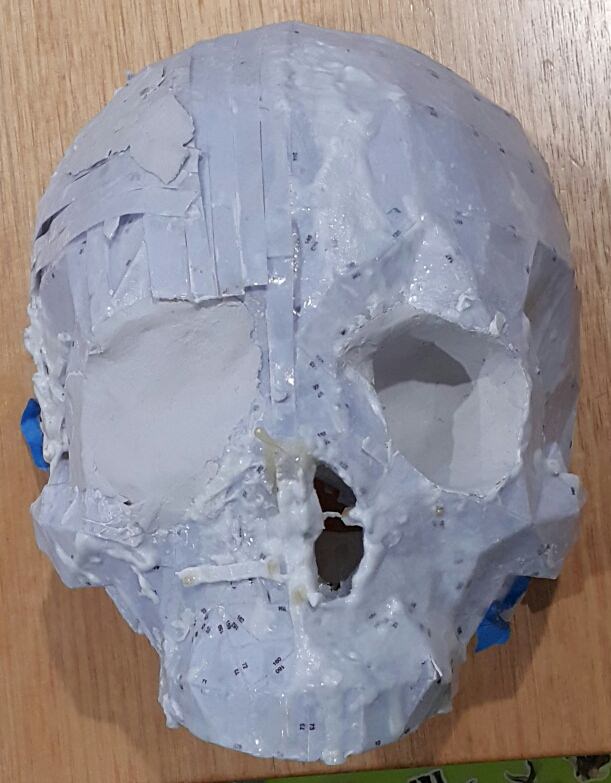 REPLY & QUOTE
SGTJKJ (Jesper) says
Iain, crazy stuff. Something out of the ordinary.

REPLY & QUOTE
Pave-Hawk (iain) says
Not sure the air dry clay will work out for this. It's quite thick and drying slowly, and there seems to be some noticeable cracking/shrinking going on. It may not stick the skull shell very well.

Plan B will be to replace the air clay with some hardware store epoxy putty.

Some really fun and interesting builds going on here.

Simon: would you say the wolf is about 7-8cm long, head to tail? Might have a future use for those.

Well, I'm off to a bit of a late restart, but here we go! This is where I left off at the end of Sci-Fi II. I've done a bit more, but my daughter has the camera, so pics yet. 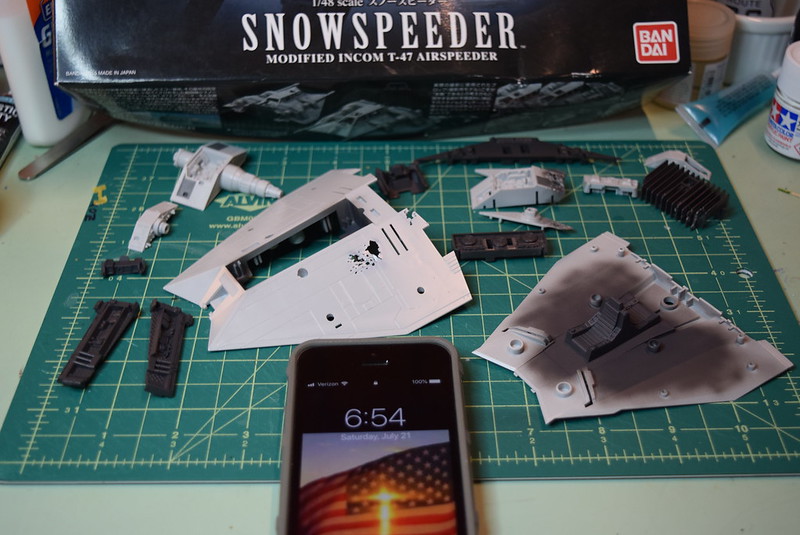 The intent is as if the snow speeder were developed by the Germans, late in 1945 or 1946, with the war still going.

REPLY & QUOTE
"Certainty of death.
Small chance of sucess.
What are we waiting for?"
-Gimli, Return of the King.

I haven't forgotten this one. I'm still sorting through my space guys' transportation. I'm on version #5 at the moment. I'm having trouble capturing that lunar rover look/stance while also making it a practical work vehicle.

Hopefully I'll have something worth showing soon.

REPLY & QUOTE
SGTJKJ (Jesper) says
I decided to go for this one. I wanted to build some Bandai Star Wars for some time now. 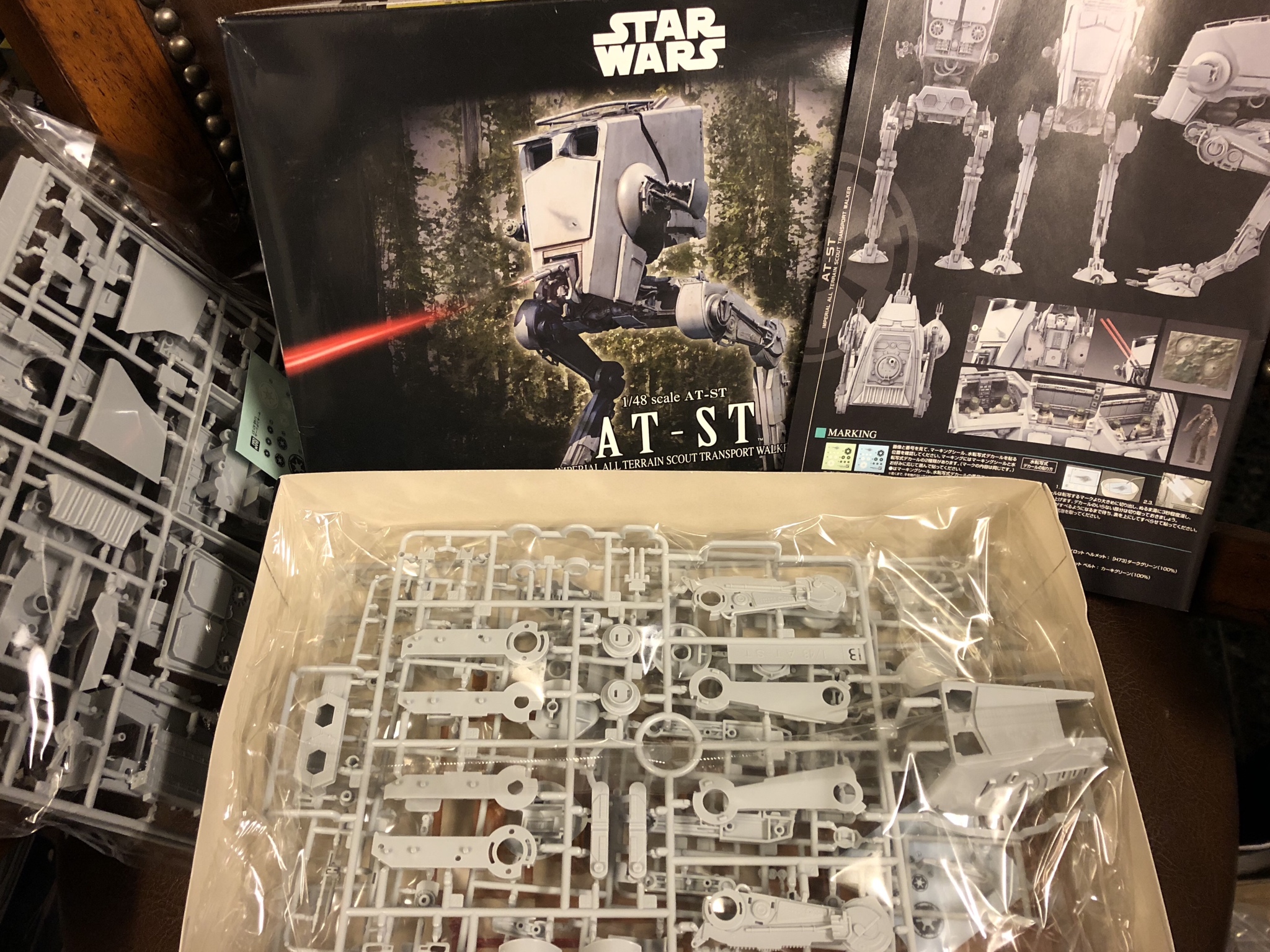 Next I will make a base for it. More to follow 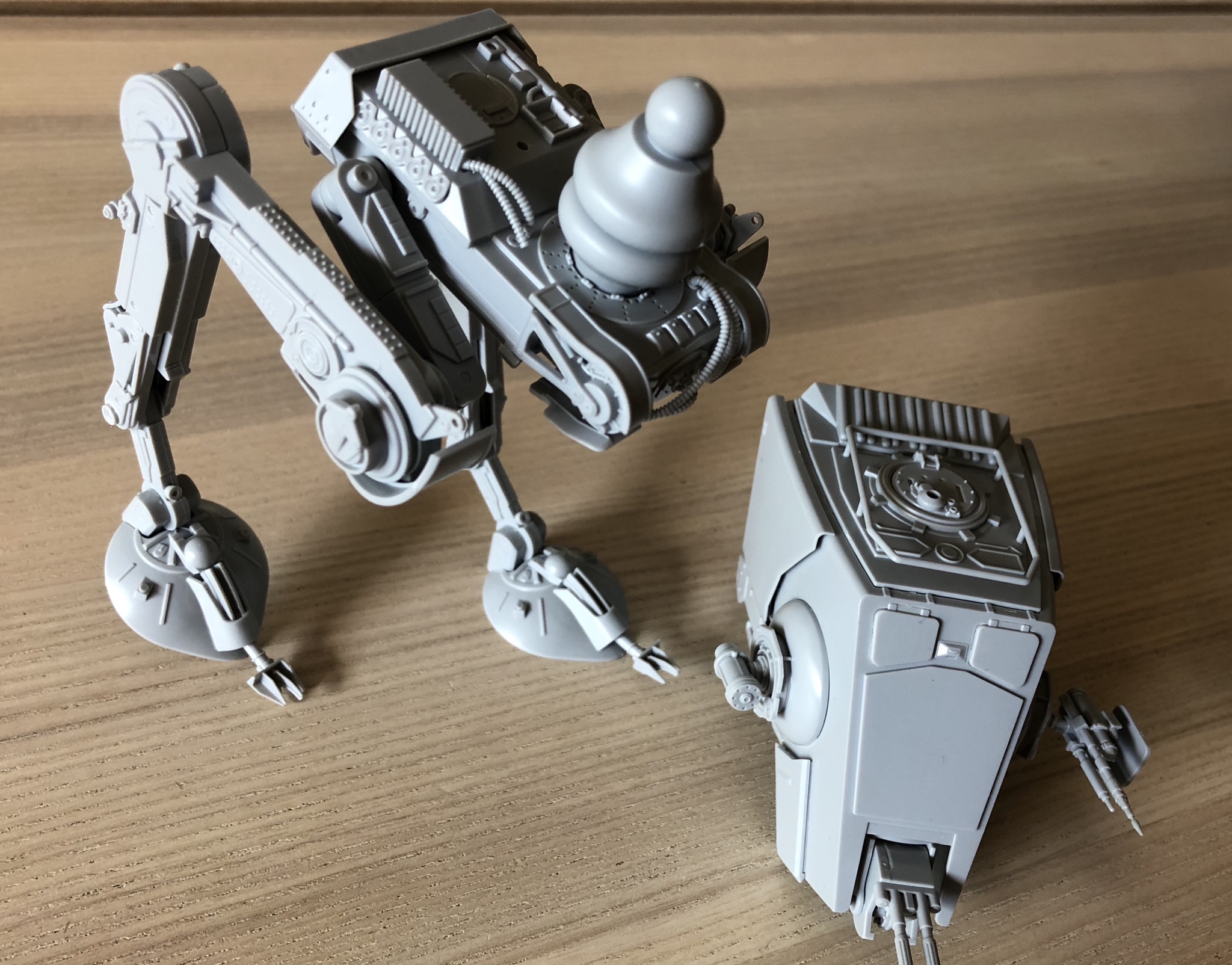 I'm getting ready to start my project, I am going to build myself a Gundam, to be exact the RX-79 Gundam.

and here is the start photo.. Looking forward to this...

REPLY & QUOTE
Dixon66 (David Savard) says
You all are killing me.

Moved into the new house three weeks ago and still don't even have all the built and unbuilt models in the room that will be the workshop. Most are still in the garage right now and there isn't even a desk in the room either.

REPLY & QUOTE
Klaus-Adler (David Myres) says
ok so we are making progress slowly, now it's primer time and i've given the lower hull a coat of halford's primer paint 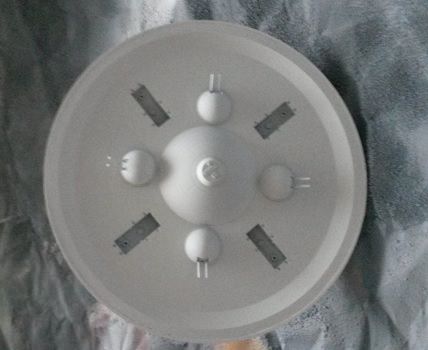 Washes and dry brushing on the fur, and more detail painting. 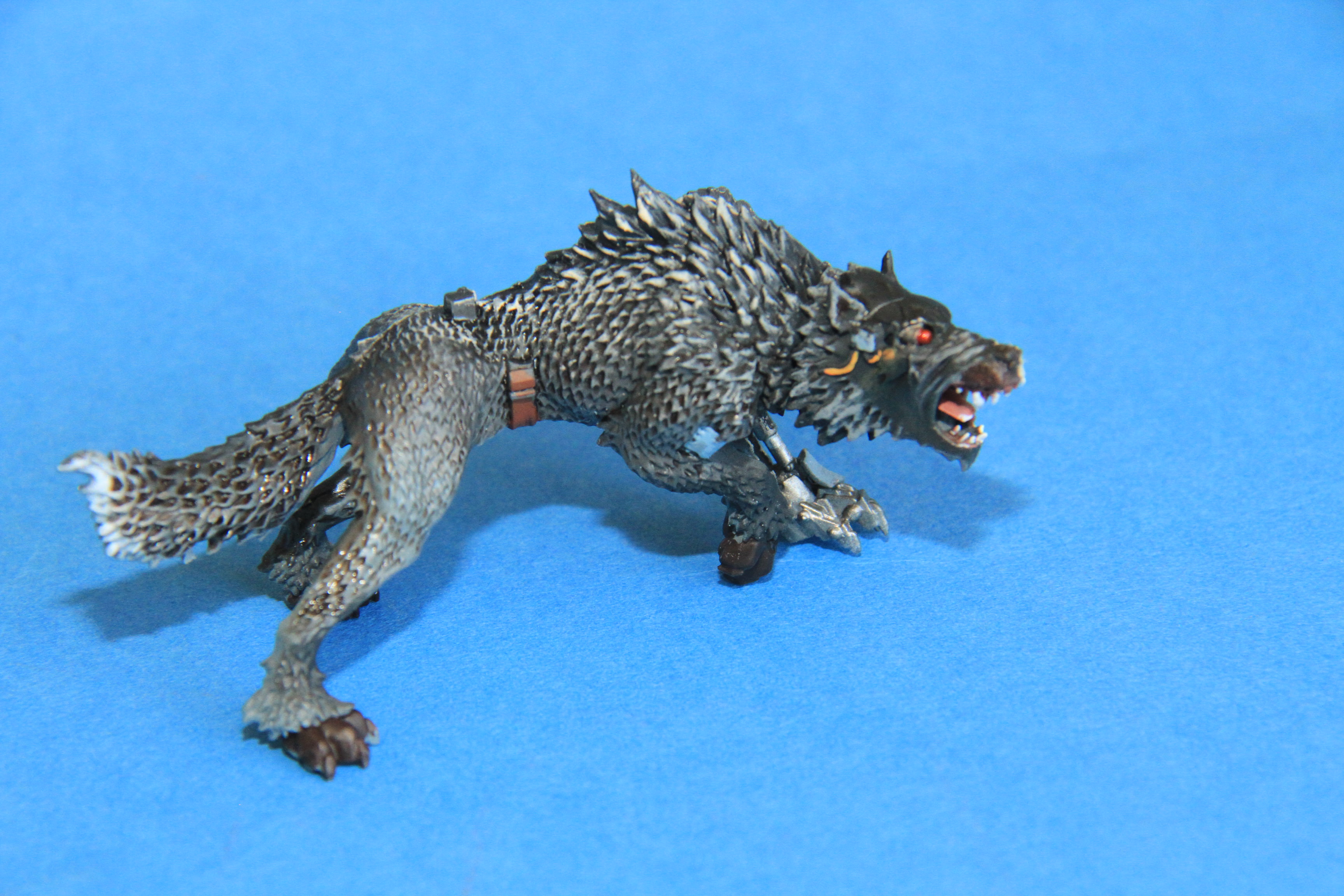 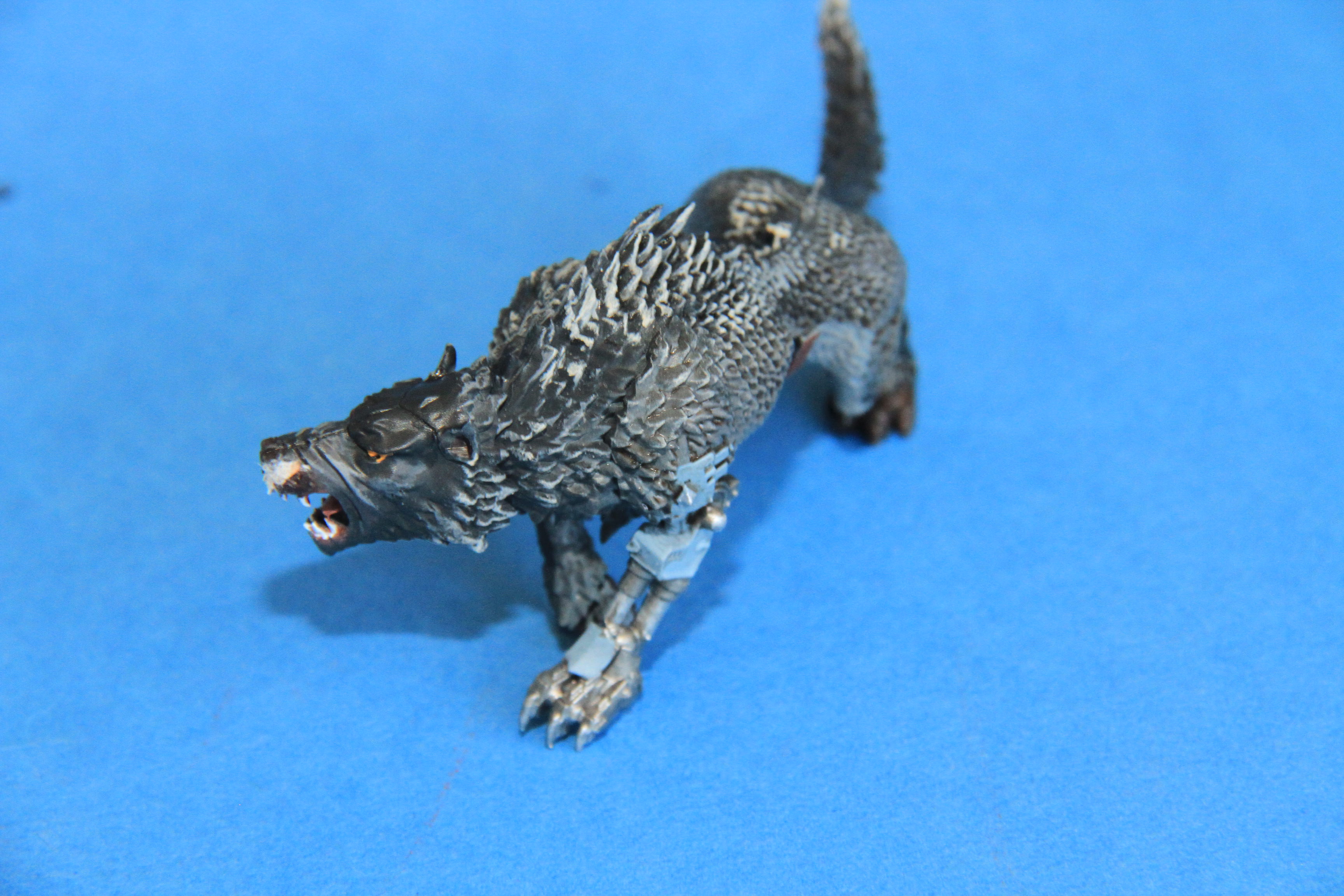 The saddle base coated and test fitted. 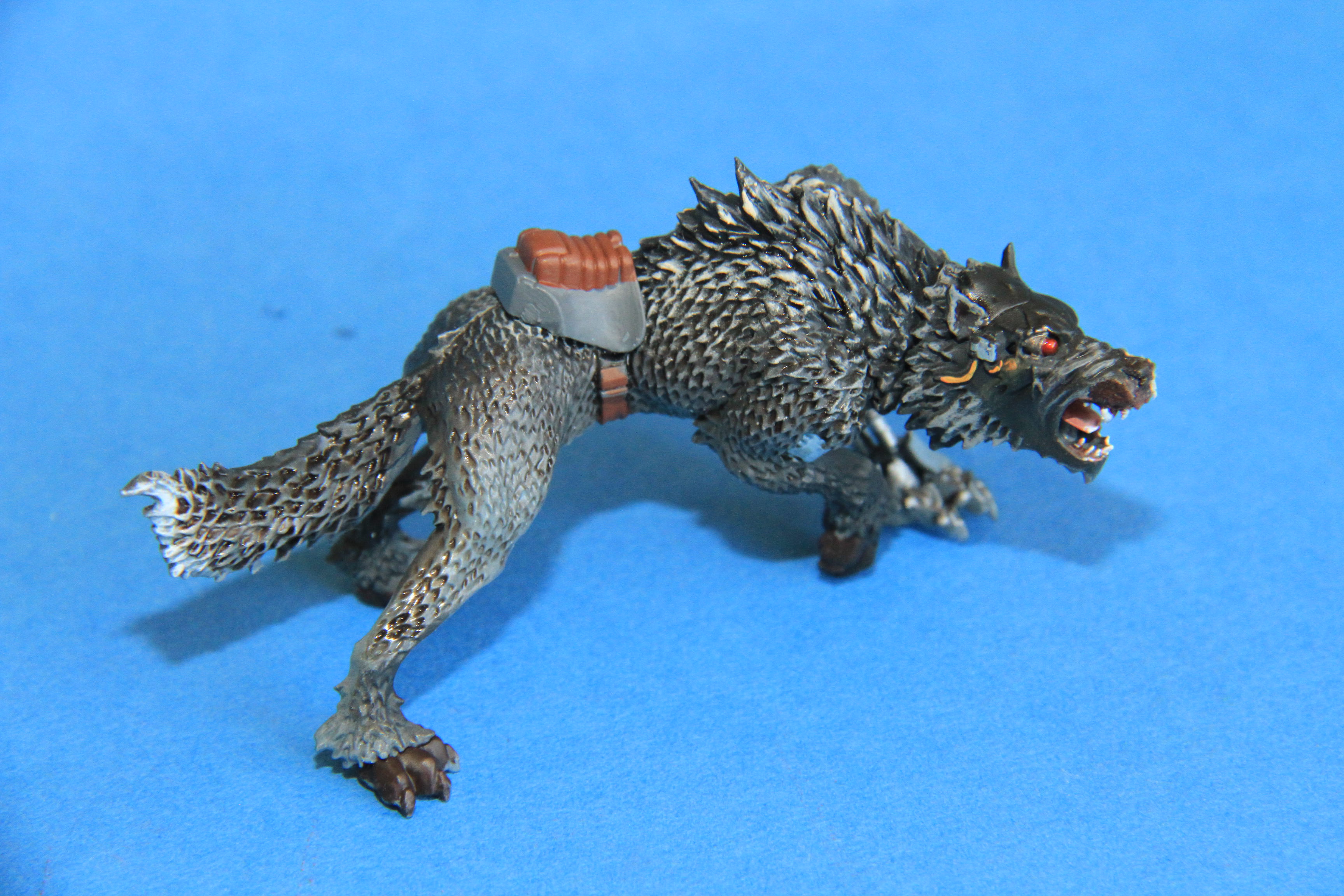 The space marine rider partly built, he will be the sergeant of this squad. 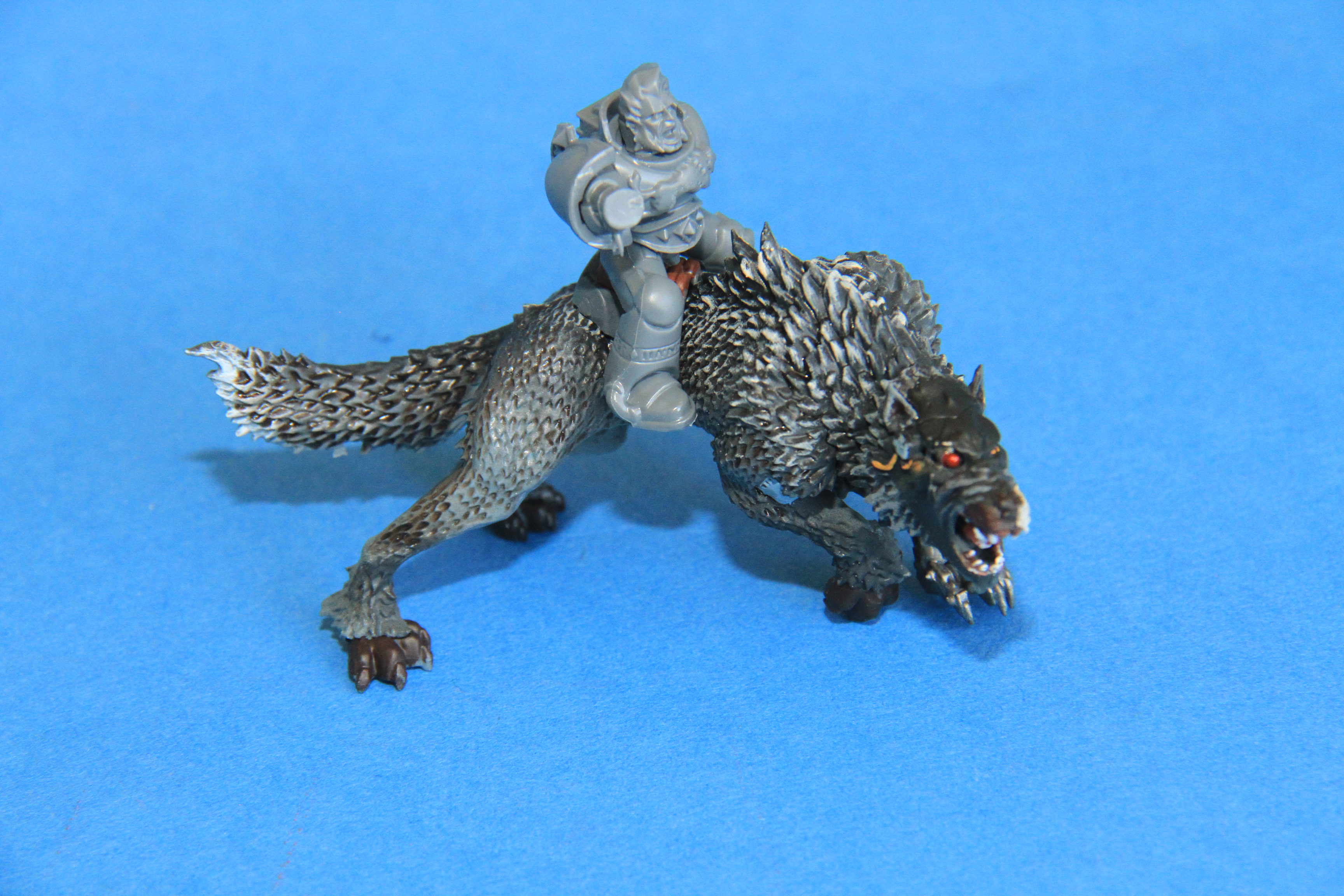 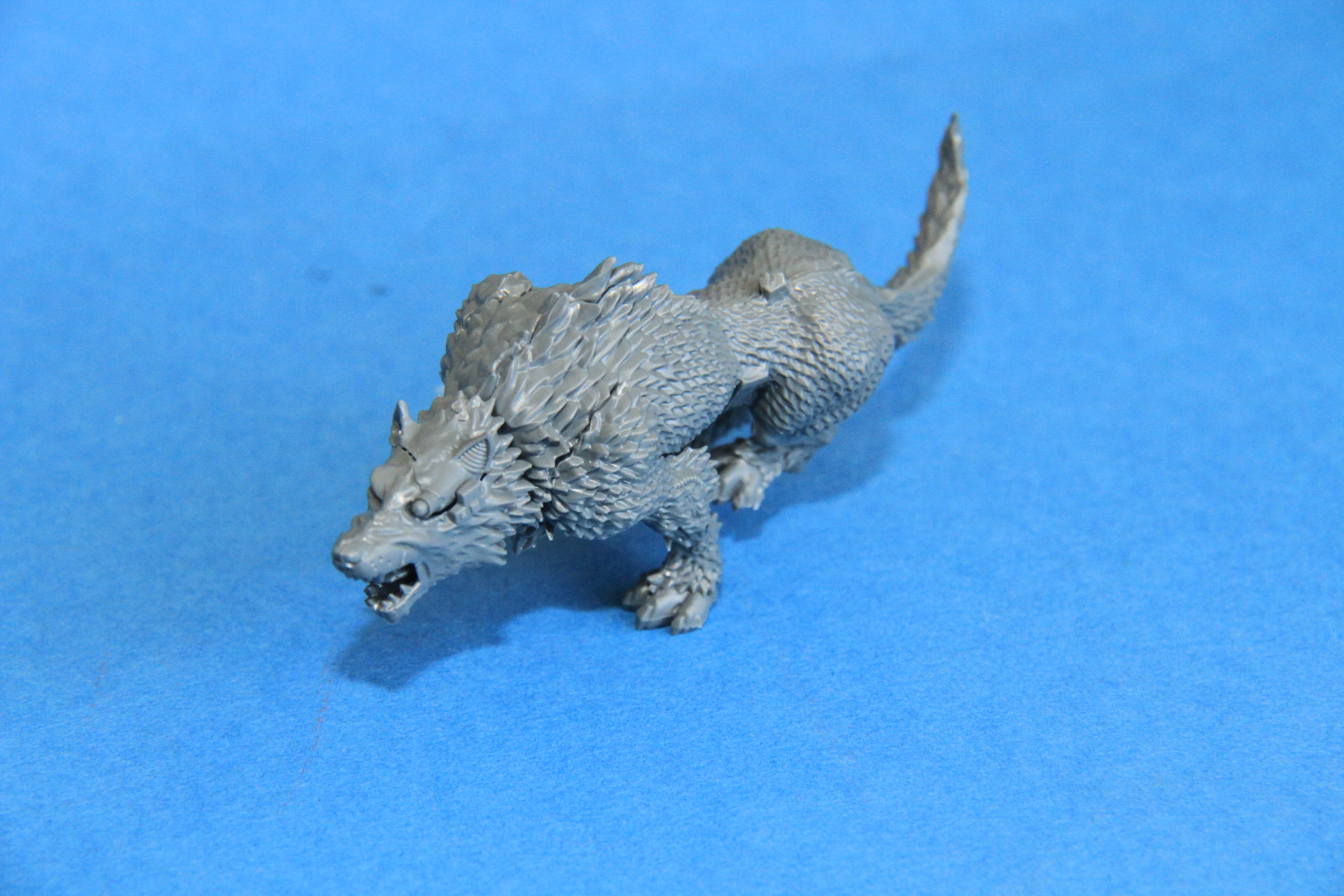 I've been having trouble getting the service buggy to look right, mainly a lower stance. I ended up borrowing the frame from a Tamiya Quad Tractor.
It still sits a bit high but it's workable. Plus, it gives it a more rugged industrial look.
I removed the body, engine, and some of the frame fittings. I played around with some bodypan shapes. I use cardstock to mock up stuff like that...it saves styrene.
The majority of the build pretty much was done on the fly. I tried to raid the spares as much as I could. You can probably see some recognizable parts used in this. 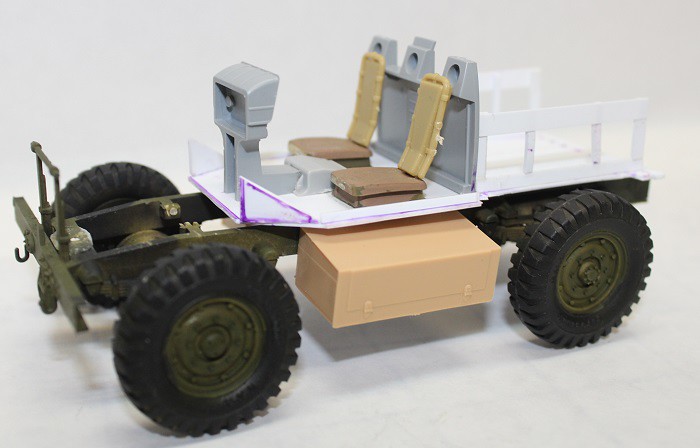 The logic behind this is that the vehicle would need to be rugged. I would think the terraforming equipment would be scattered about and maintenance crews would need to service them. Roadways would be dirtroads, so 4WD. No real atmosphere to run an internal combustion engine, so electric drive. To allow range they'd use a hydro-based engine as part of a hybrid system. And they'd have to carry enough food, water, etc. to survive while out on their route.
The vehicle would have to carry the more likely items for maintenance and repairs. I also figure the TF units would be simplified and bullet-proof. I would think maintenance and repairs would be simplified to a relatively small number of tools.
Crews should be able to plug in to the buggy for air and power to preserve their suits and recharge them. It's a no frills work vehicle and I plan to leave the cab open. 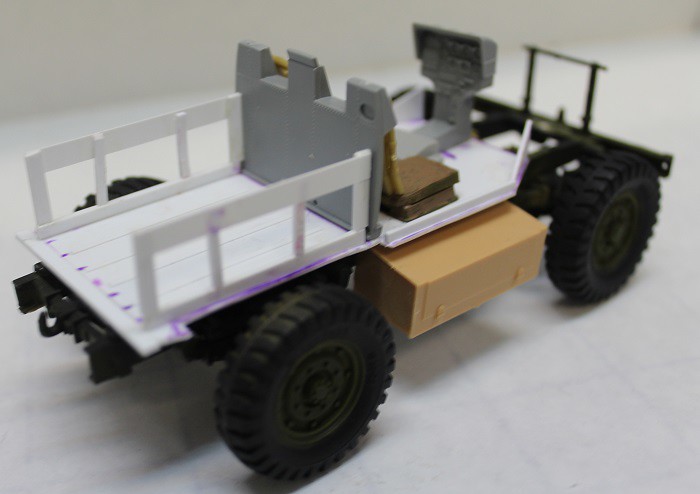 I still have to work up the front, which would include the electric drive motor and hydro engine. I'll probably add a winch to the front. I'll do some basic fenders for the tires. I want to add some solar panels to supplement the electric recharge.
I might scale back the terra-former. I'm not sure yet. It's for size reasons. I'll have to see how things look once I start with the base layout.

Simon, very nice work on the wolf. The fur is coming out nicely.

Alex, I think the height works. You would not have something just over the ground. There should be some clearance for rough terrain etc. So I think your chassis is fine.

REPLY & QUOTE
Pave-Hawk (iain) says
So the air dry clay didn't work, shrank, cracked and wouldn't stick so I went to plan b and used up some old epoxy putty to give support then finished off with some apoxie sculpt to give a smooth surface for the ocular cavity, and edging for the cybernetic eye. 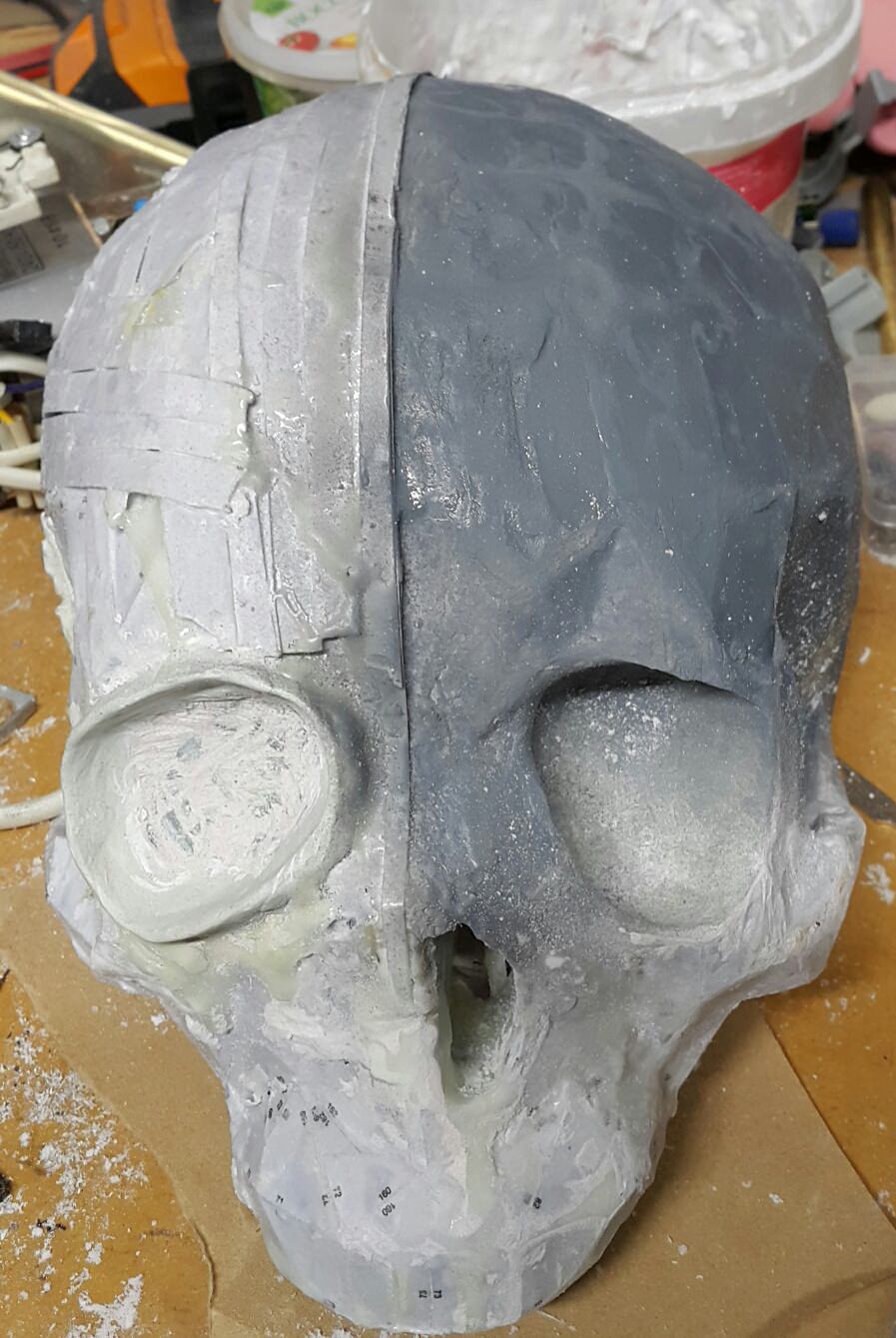 Have also started sanding one side smooth and gave a quick spray of primer to check what needs more work.

I want a concave surface on the cybernetic eye, so I partly inflated a balloon, and poured some epoxy resin in the socket while pushing the balloon in to try and give it the shape. Unfortunately it's slow cure epoxy so I had to find a way to hold the balloon in place while it cures. 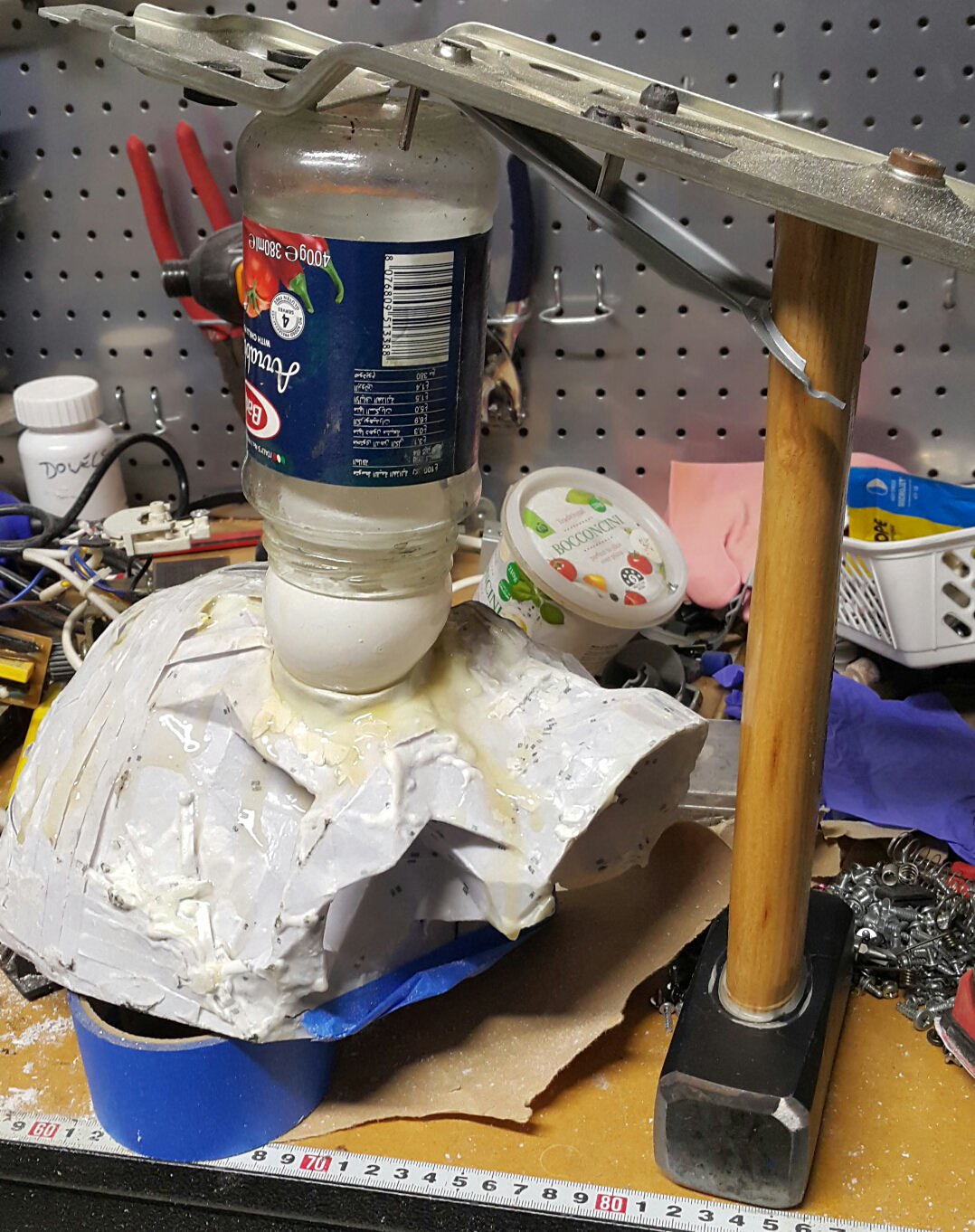 Don't worry, it's even dodgier than it looks.

REPLY & QUOTE
RedDuster (SimonHeathwood) says
Thanks for the kind comments guys, I am enjoying playing with the washed and dry brushing.

Almost there, think I am happy with the fur, details painted, saddle dry brushed and washed, and fixed down. 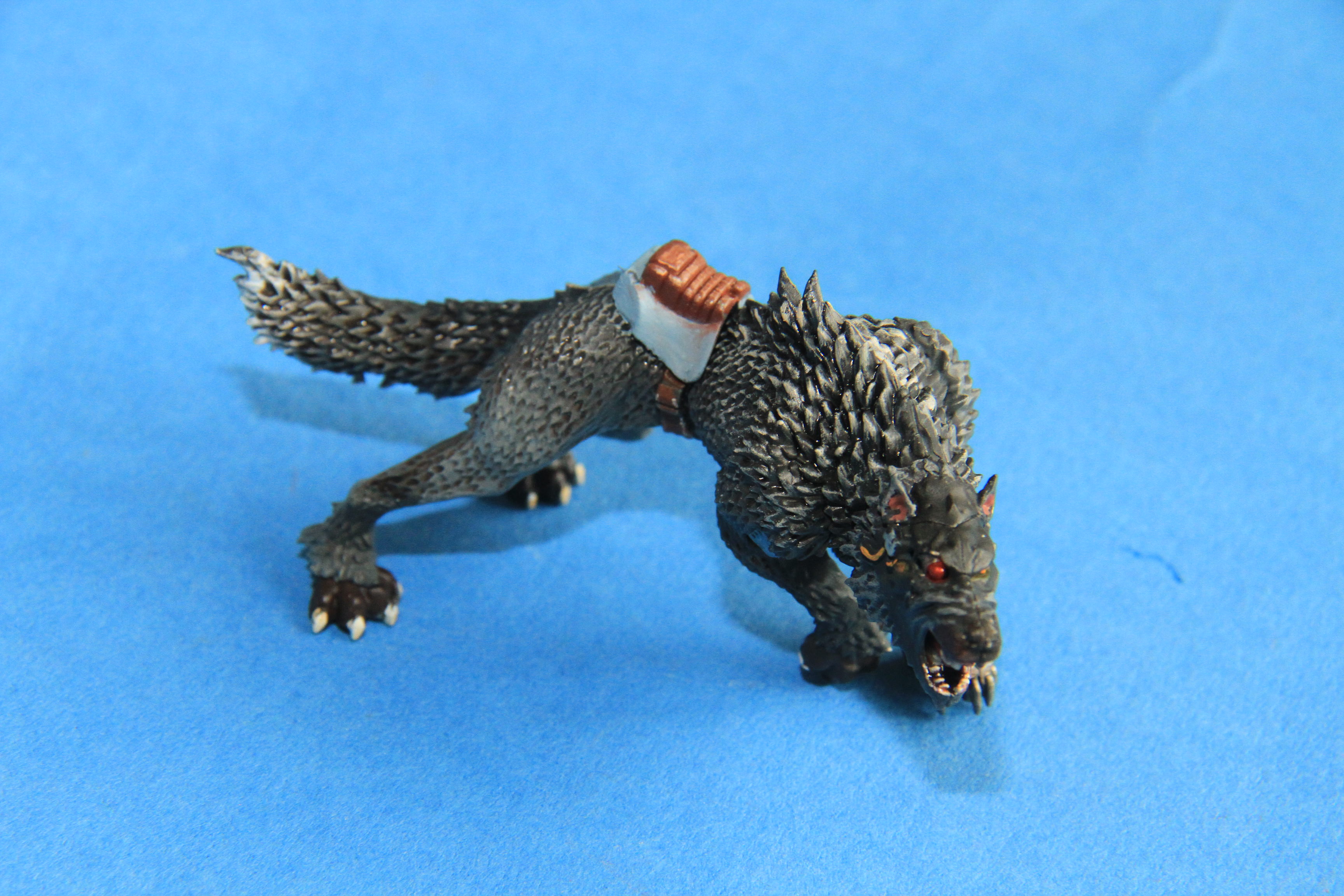 the left eye detaied , and a glaze added to give it a shine left ear still needs a bit of a wash though. 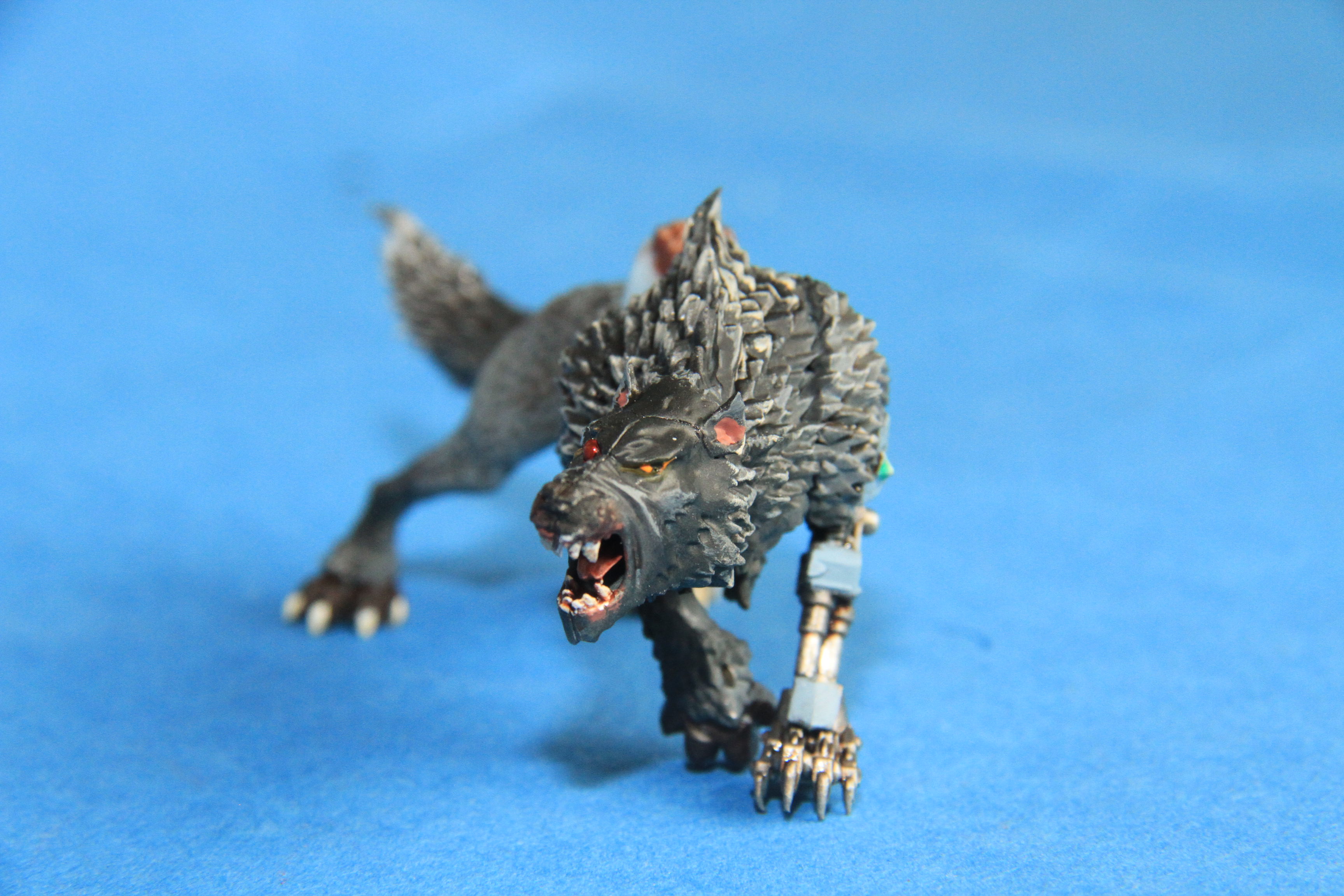 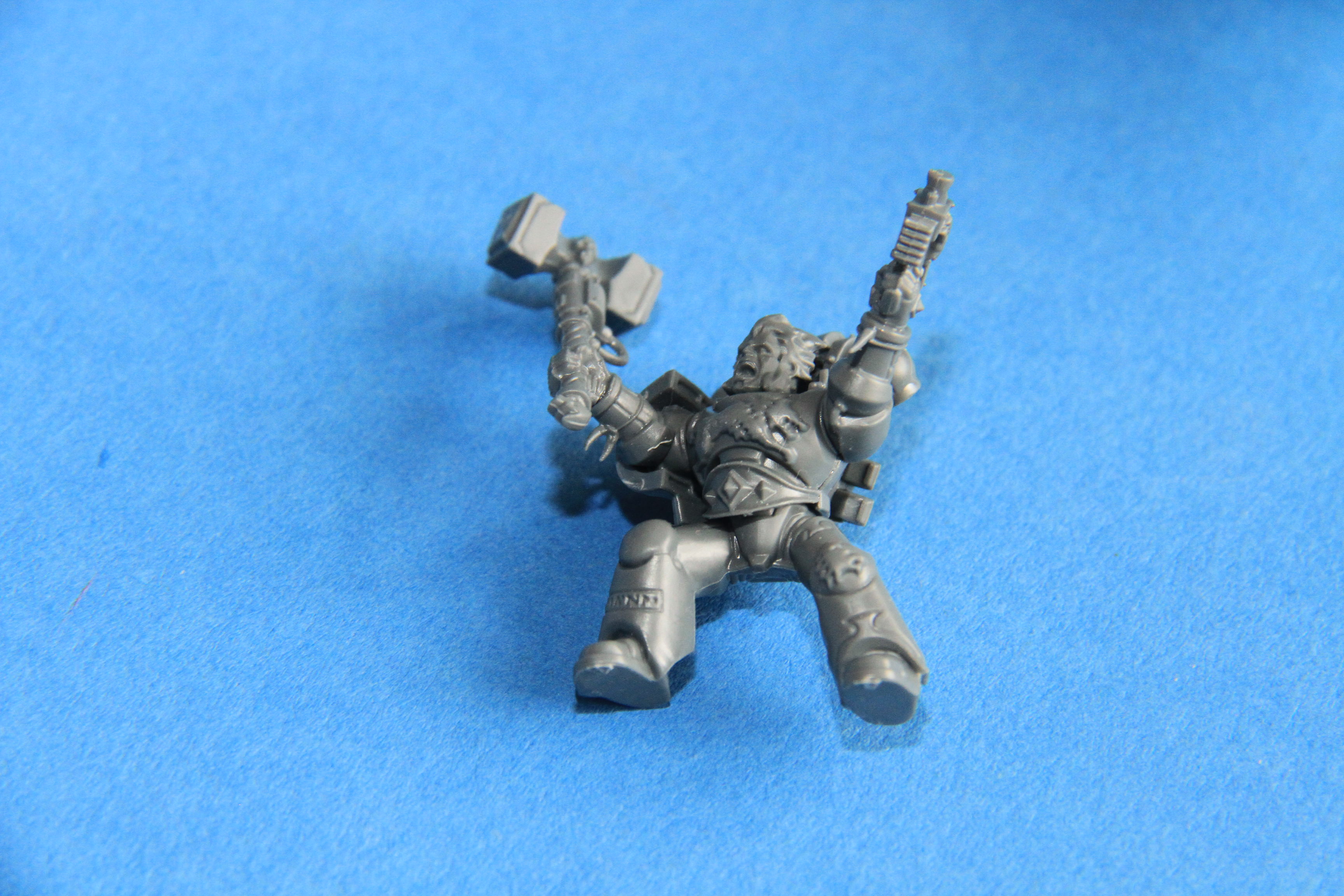 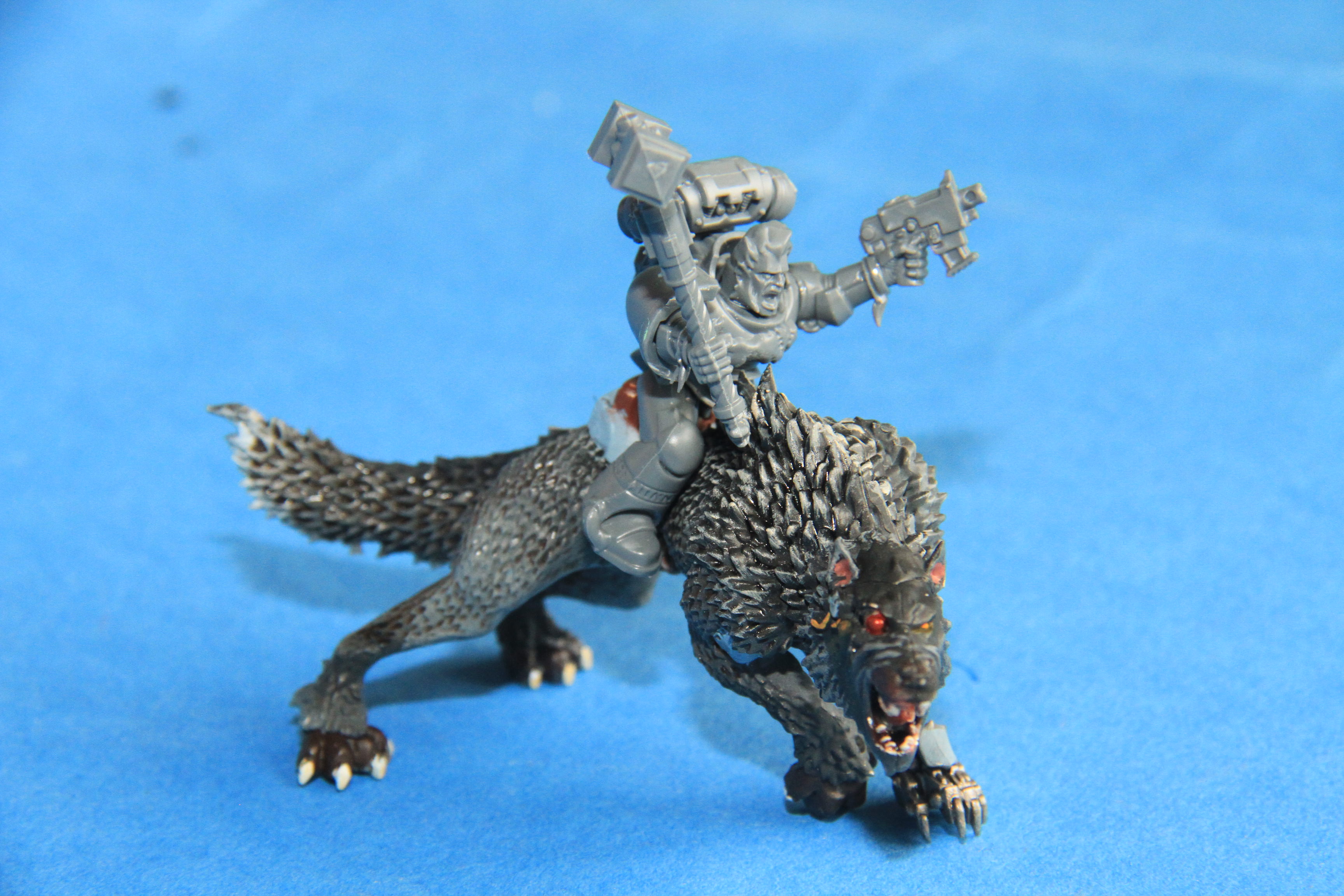 Finally, the beast fixed to the base, bit of groundwork will be added. 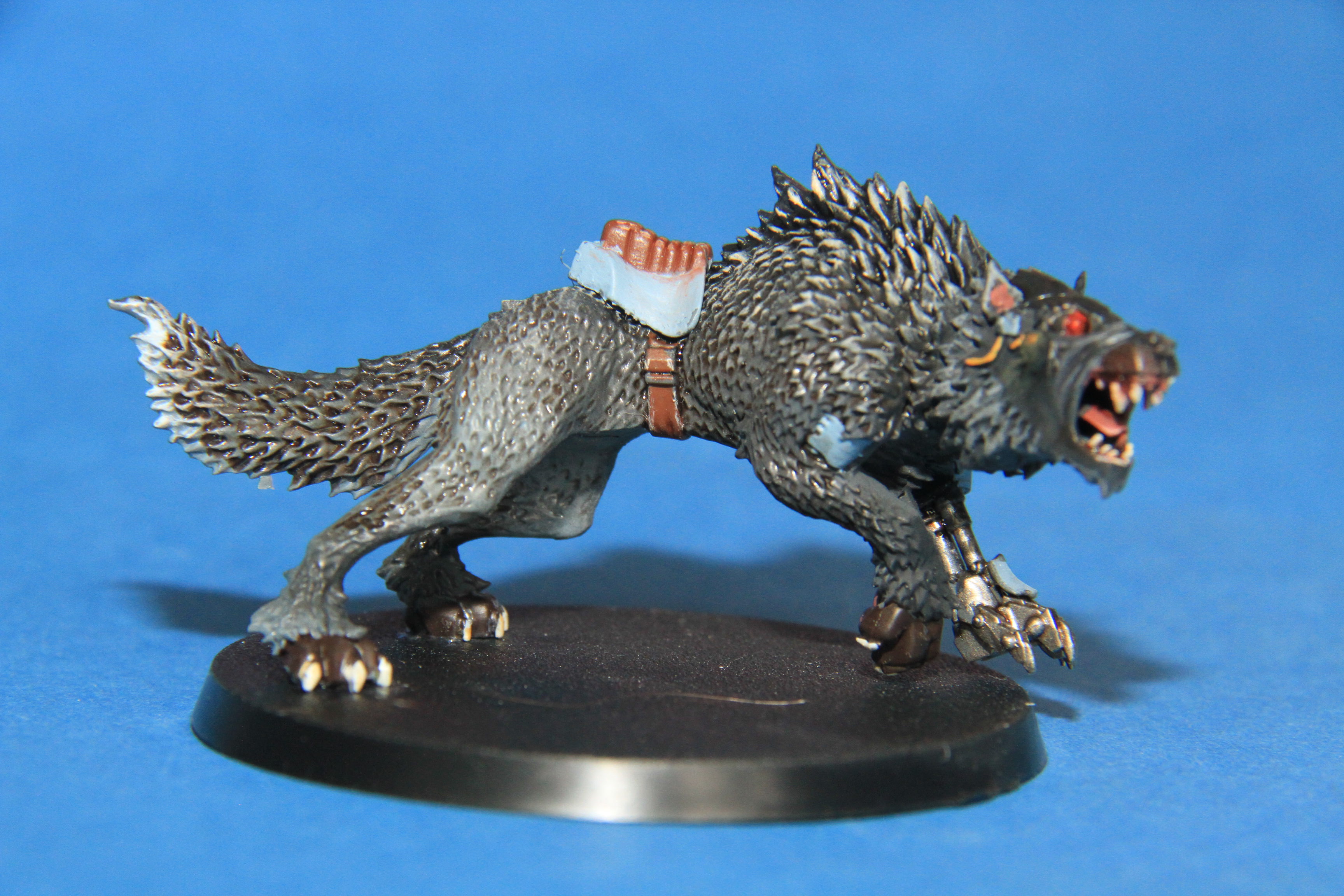 The 2nd wolf has been base coated. he is going be shades of brown. 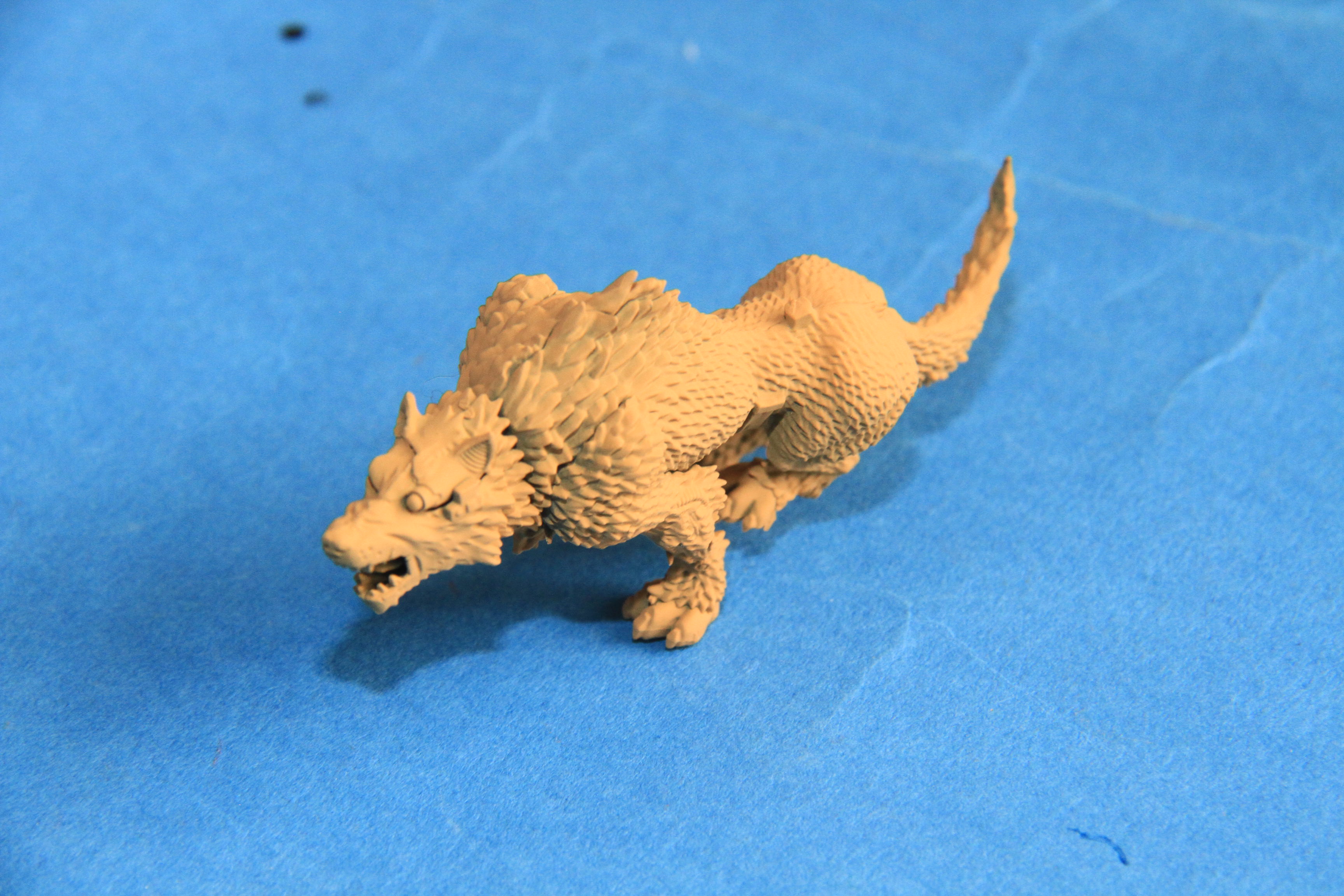 REPLY & QUOTE
Pave-Hawk (iain) says
My cybernetic eye socket was about 80% successful. Nice smooth surface at the bottom, but a couple areas not filled, and one small bulge where I didn't quite ground enough material away to start. 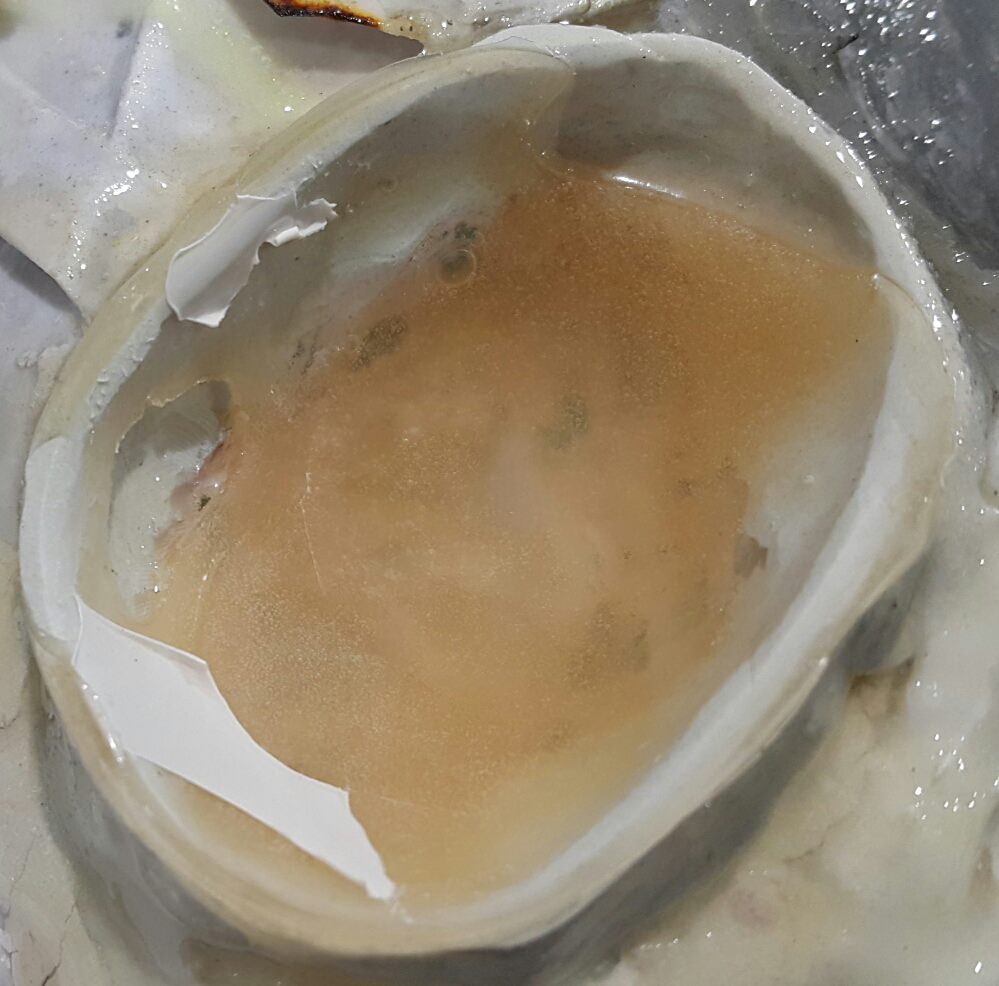 The epoxy hasn't properly cured around the edges either, not sure if that was because it's quite cold, or if my epoxy was a bit dodgy. It's suitably hard where the balloon covered it, but the stuff that leaked out is still very sticky.

Three more photos are in the gallery.

The model (Industria Mechanika's 1/35 Walrus) was an easy build and it's out of the box except decals and brass MG barrels. Had fun building it.

Thanks for the campaign.