PHOTOS
didgeboy (Damon) says
First time posting any thing other than a question on the Model Geek area. I usually hang out with the other tread heads on Armorama. But been too many weeks without working on the three builds I have going so I needed to do something "easy" to stretch the modeling muscles as it were.

I have had this kit in the stash for a while now maybe a year or so, although I am no stranger to the Macross/Robotech genre as I watched the tv series back in the day and have many macross and mospedea kits from the old day (still waiting in the wings to be built). Since I knwo what this is supposed to look like at the end and I know how to weather this, I figured I would give it a go today.

This is the 1992 Bandai release of the Destroid or "Missle Phalanx" as the box reads. It differs from the older Macross release that I am more familiar with from Imai and Arii in that there are no poly caps to create the moveable joints. Within the box are 3 sprue trees and one decal sheet and some VERY simple instructions (the old kits even included a tube of glue!). The parts are all molded in tan plastic so if one was not confident enough with their painting skills or lacked an airbrush, you could fake it. The plastic is well formed and mostly devoid of any flash. The Molding seems crips and detailed for the kit, i.e. what detail IS there is nice, but this kit is not particularly a masterpiece waiting to be built, if you know what I mean. That is not to say it is a bad looking kit, just simple. Most of the parts are connected to the tree with smaller bits and removing the sprue is easy and cleans up well with little to no problem.

The instructions are a bit over simplified and could be bigger for us old guys but, what are you gonna do, right? Step one is the assembly of the arms, 2 goes to the legs and so on with only 4 major sub assemblies. Step 5 brings it all home, so as I said easy.

I started today with the legs as they seemed the most basic. Fit was nice and went together with little effort and little hassle, none actually. Fit was nice and only required a bit of seam clean up once the glue was set. A little surfacer will eliminate any residual seams. The torso and main body went together similarly well and only required a bit of pressure to make sure the fit was tight. Again a bit of sanding along the seam but nothing unusual. Head is a small affair and needs some surfacer along the side seams to eliminate the joint, but again this is par for this course. The arms/missile tubes were the only part that required some extra attention. The seams are good and the fit is nice, but the seams needed to be filled and sanded with some surfacer more so than other areas, just so that the joint will not show. The inside of the missile area needed a small bead of fin styrene rod to close the gap between the wall and the missile housing. This was again easy and looks good when done, I think I used .020 rod. I am waiting for the surfacer to dry for the next sanding and then wash and primer. Cheers. 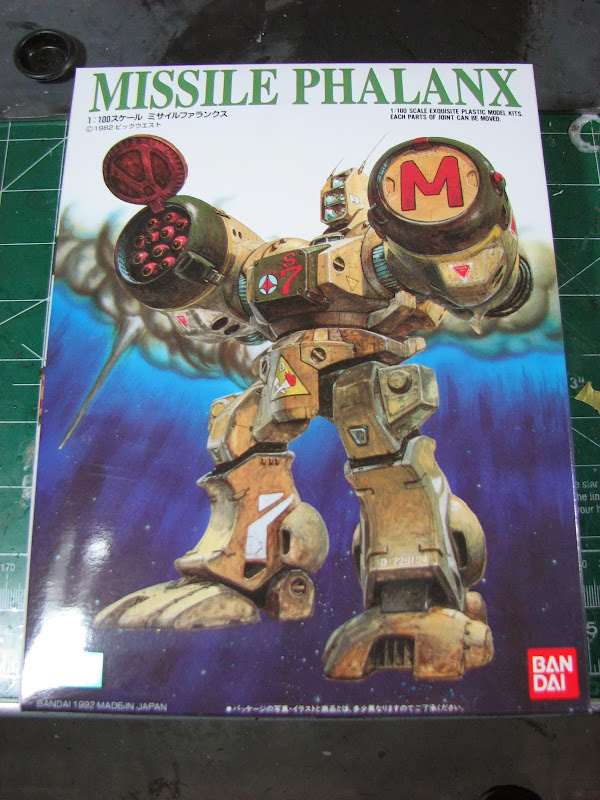 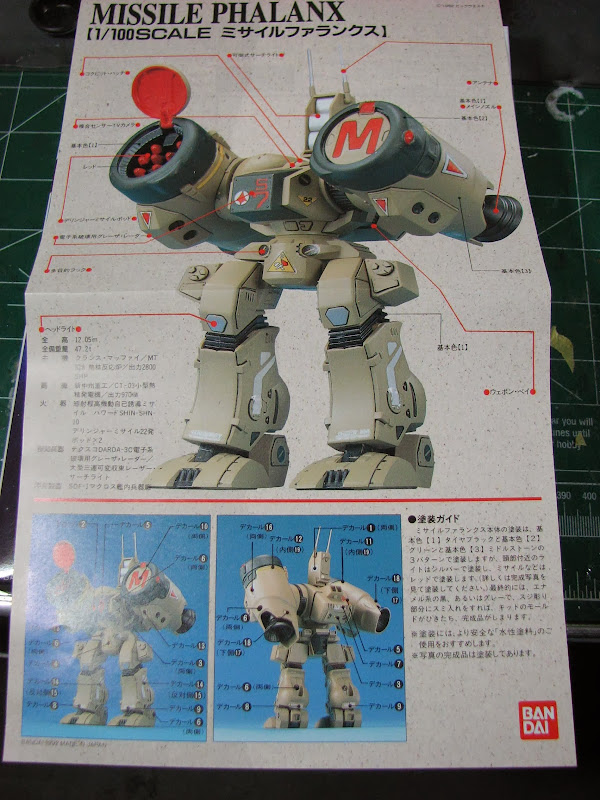 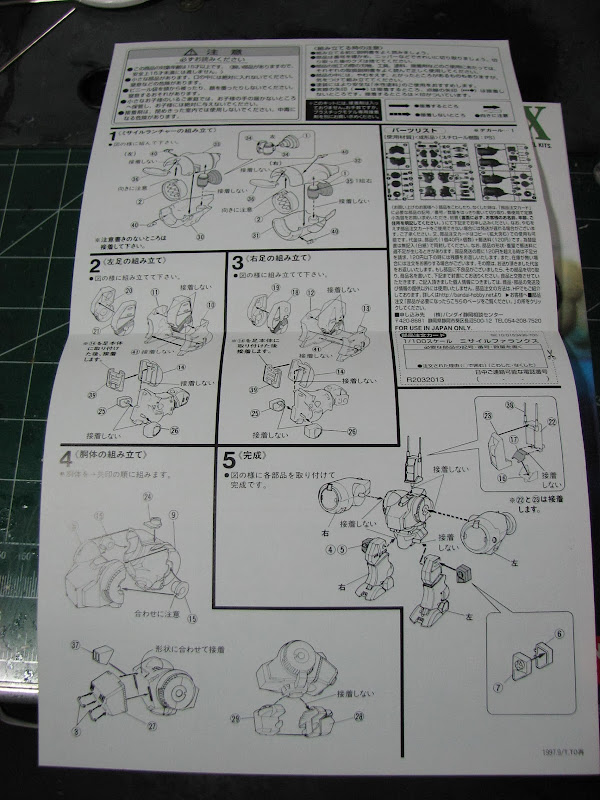 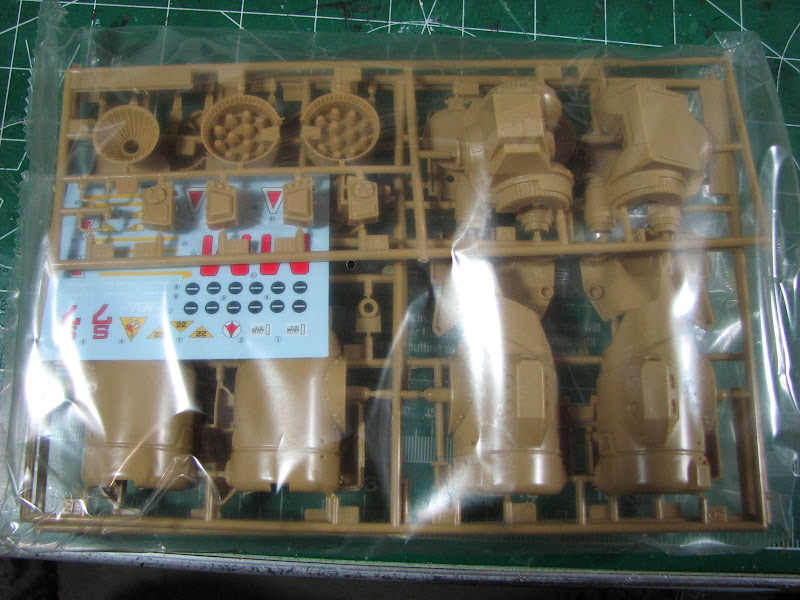 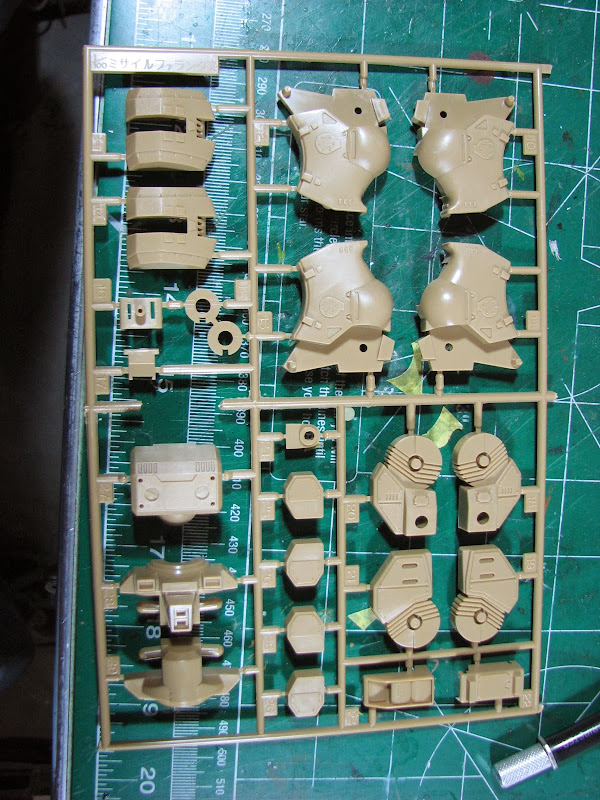 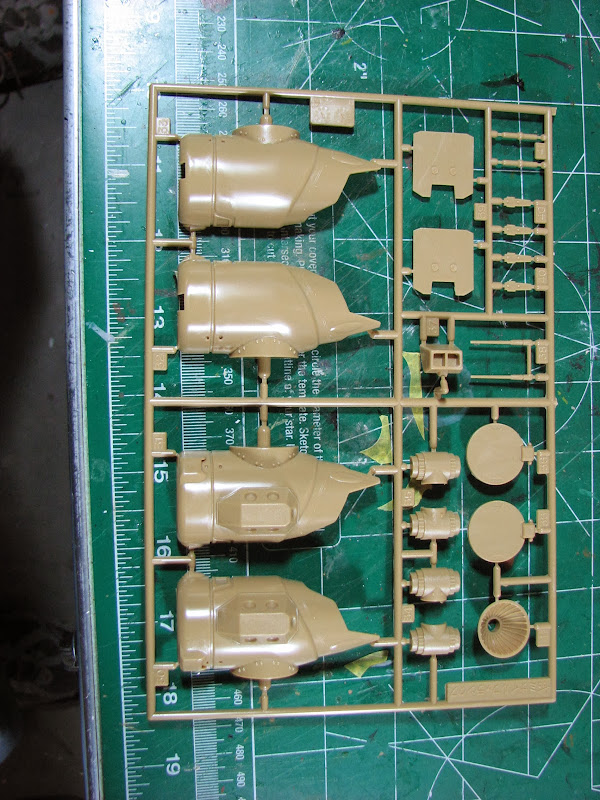 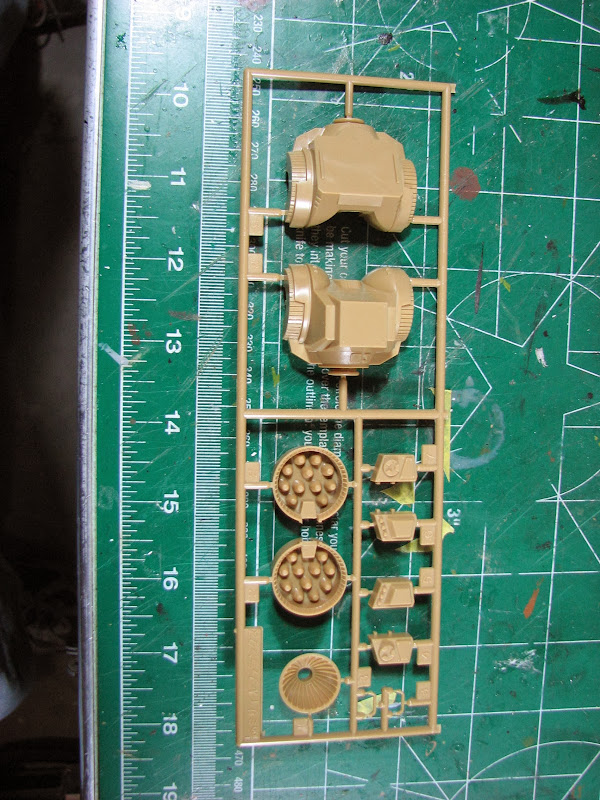 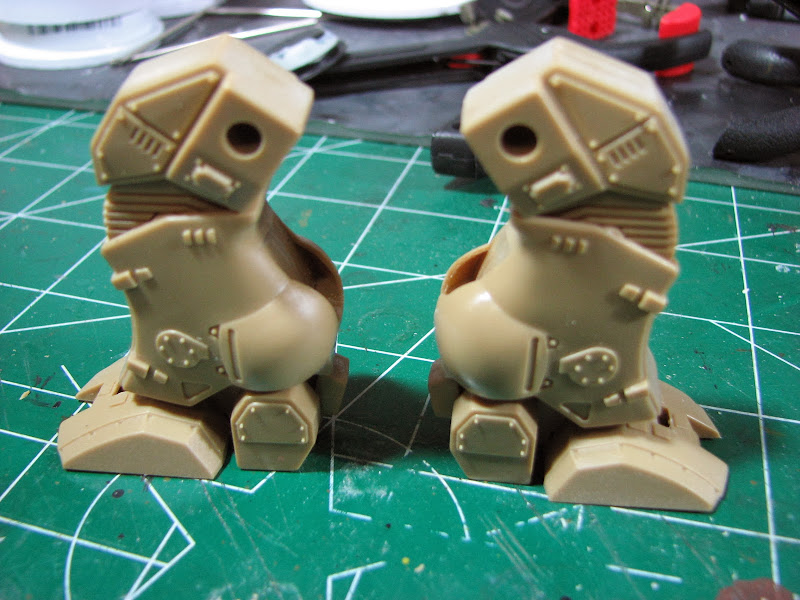 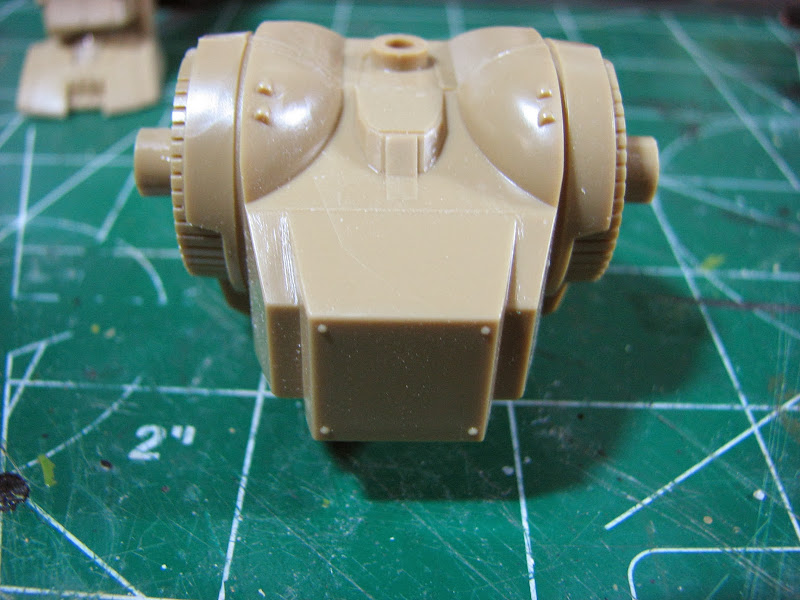 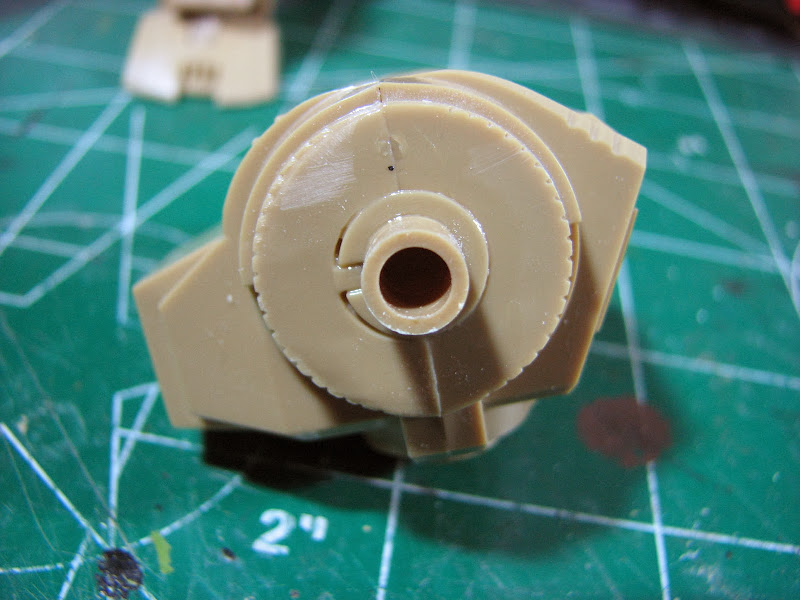 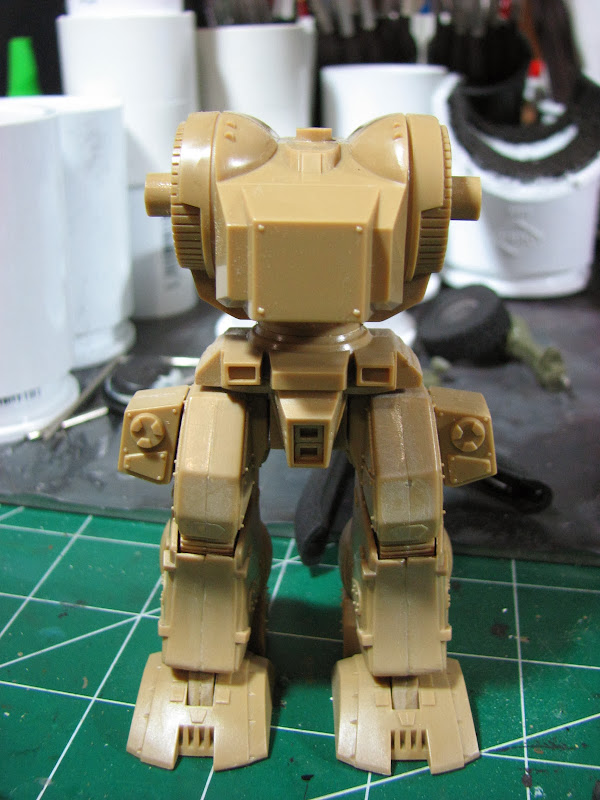 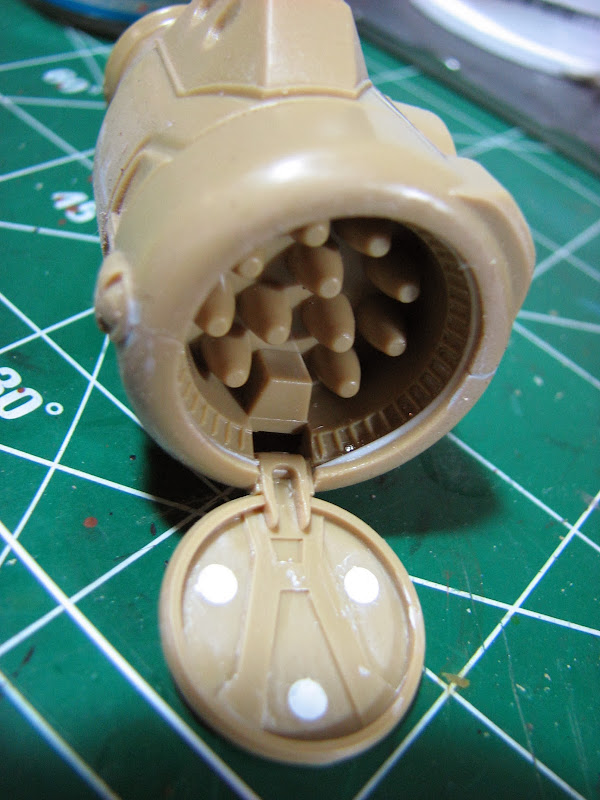 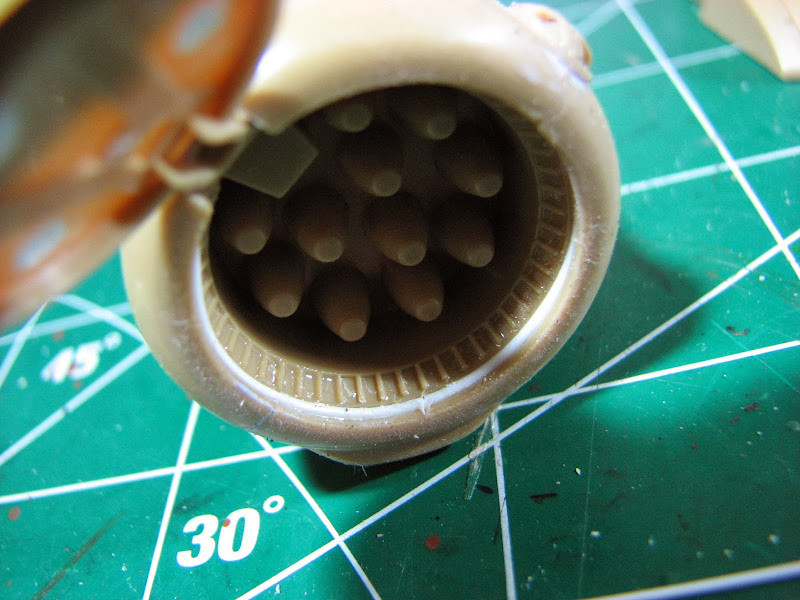 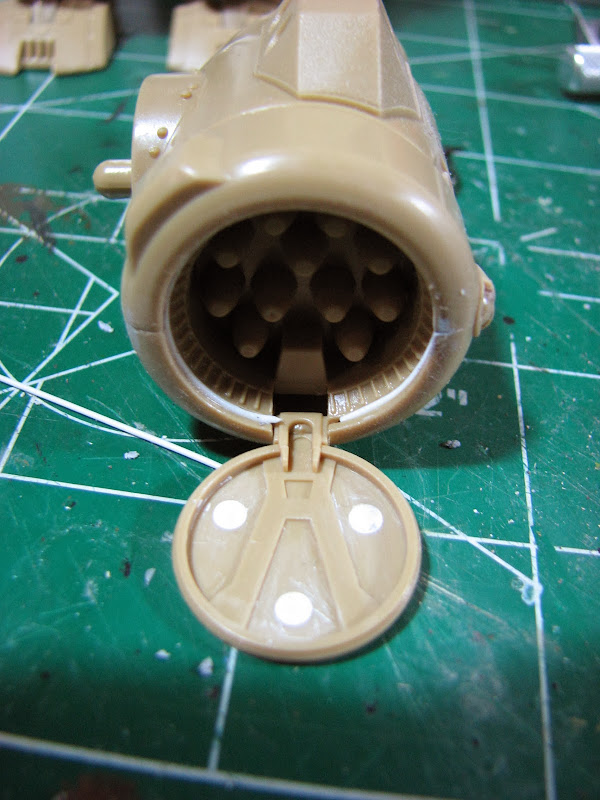 PHOTOS
didgeboy (Damon) says
Primed and paint today along with lots and lots of sanding. This thing has some annoying seams that do not want to go away. Will post pics late tomorrow I'd I can get it. Headed to a funeral this weekend so it's an as time permits. Cheers.
On the workbench:
Trumpeter Faun SLT 56
Tamiya A- 10 1/48
Academy 1/700 USS KITTY HAWK

PHOTOS
vonHengest (Jeremy Hengest) says
I understand your frustrations with the older Macross kits like this, but I've always been a fan of the Phalanx.
Model on!!

PHOTOS
didgeboy (Damon) says
It's not a bad kit Jer it's just a little frustrating after building some really nice kits lately. I think this is what used to frustrate me about modeling. Hopefully I can get things to work themselves out. Cheers
On the workbench:
Trumpeter Faun SLT 56
Tamiya A- 10 1/48
Academy 1/700 USS KITTY HAWK

WWW
Aurora-7 (Michael Paquette) says
The Phalanx is a cool looking Destroid. Doesn't have the guns of the Tomahawk or the tough look of the Spartan but something about those barrel shaped missile launchers just give it a no-nonsense war machine look.

So far yours is looking pretty good.

"I wish to have no Connection with any Ship that does not Sail fast for I intend to go in harm's way." - John Paul Jones

PHOTOS
Jedge3 (Jeff Edge) says
Really nice build. I just finished mine up late last year. It was great build but I had a really hard time getting rid of the seams on the back part of the legs. Did you have any issues?

PHOTOS
didgeboy (Damon) says
Yes. The seams in a word suck. Surfacer, putty, surfacer, putty and a whole lotta sanding in between, but they still persist. I am hoping that if I wish hard enough they will magically disappear cause I have tried everything else.
On the workbench:
Trumpeter Faun SLT 56
Tamiya A- 10 1/48
Academy 1/700 USS KITTY HAWK

PHOTOS
didgeboy (Damon) says
I finally gave up on trying to make the seams perfect and went with passable (this was supposed to be a "fun" build to pass the time with). The kit was painted a while back, before the airbrush issues started and fixed.
In all honesty I think that there are many of us that think we are thinning our paint enough and really are trying to push greek yogurt through our brushes rather than REALLY thin paint. Having seen some video tutorials online I am guessing that this is the issue as I often get micro particle build up that causes the needle to stick in the housing.
So after sitting there painted for a while while I worked on my other project, I finally picked this up again as the PE and figure faces just started getting to me. Black was added to the launcher ends and other areas that needed small painting were done.
I then began doing some "pre-chipping" drybrushing with Tmaiya OD, very faintly along the edges and areas that would naturally wear more. Then this was touched up with some Tamiya Chrome Silver in the same way, very faint. This was also added to larger panel areas again, very faintly, just to give the illusion of metal underneath the paint.
Tuesday afternoon I hit this with future and prepped for decals.
Now, here I will note a mistake that I made. I glued the mounts for the "arms" on backwards or wrong side, what ever you want to call it. They should have the part that is protruding on my model from the torso facing inwards so there is no protrusion outward. That is to say that the torso arm attachment area should be flush and not raised. 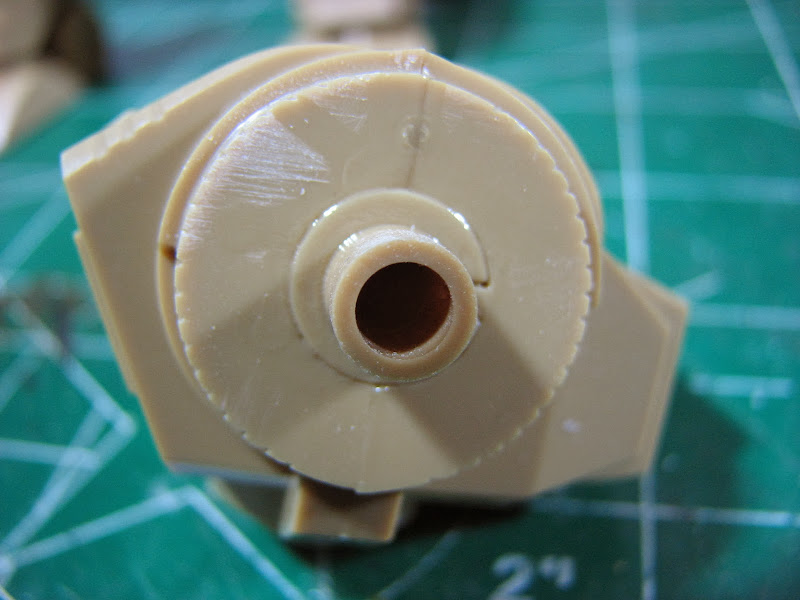 what you see above is wrong.
I was forced to cut mine off in order for the arms to fit correctly against the torso. Live and learn or pay better attention to the directions.
I began decals last night and am about 50%. I will post pics later, as forgot to upload them last night. Cheers.

PHOTOS
didgeboy (Damon) says
OK, so I suck. I promised photos and updates and other projects (including the 1:1 scale) have been keeping me from my duties, no excuses though.

So, Update; did my initial drybrushing/chipping etc, then followed with a good, liberal application of future. Decals have been going on in stages, as they are, in a word, a bit frustrating. The outer film is thick and you need a good amount of SOL to help tack this down well so that there is no film visible. The decals themselves are a bit wonky. They seem thick at first then they tear easily. I dont get it. So over a few days I have been adding decals to this and working on another project so that between the two I am feeling a bit batty most days. FUN!
The only decals left to add are two yellow stripes, which I am debating the need for and the circle line decals, not sure what to call them. After that, future, oil washes and chalks. We shall see what happens and I will try to keep you all updated. Cheers. 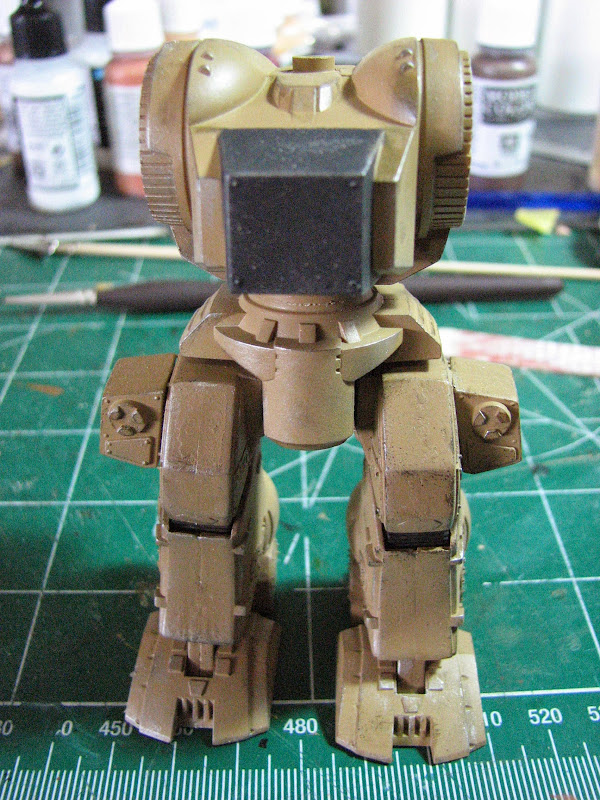 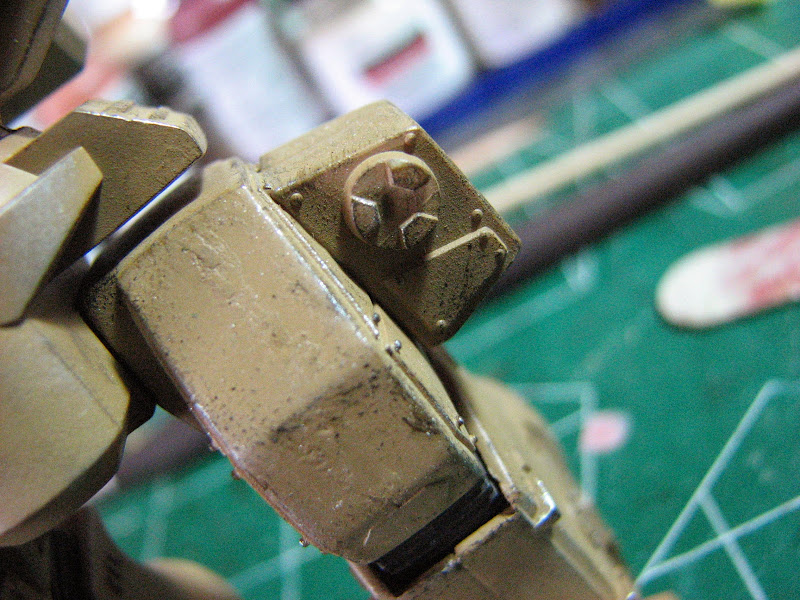 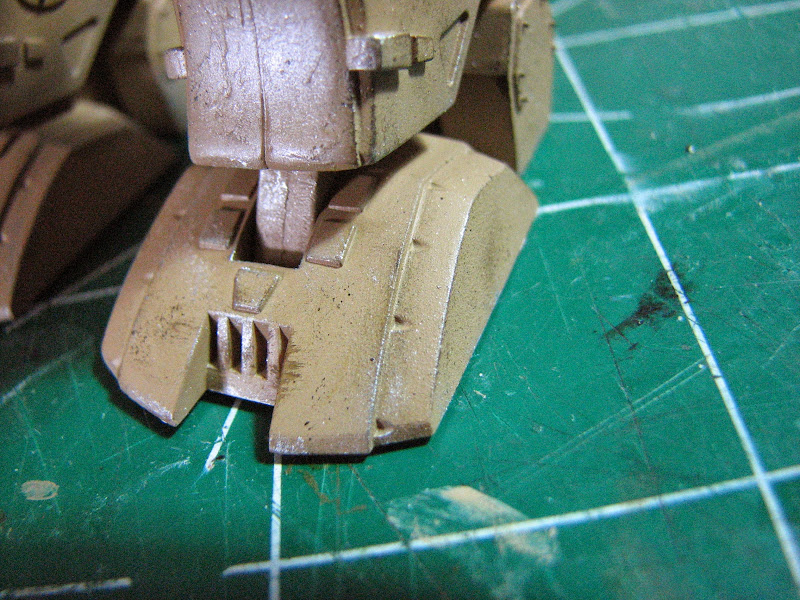 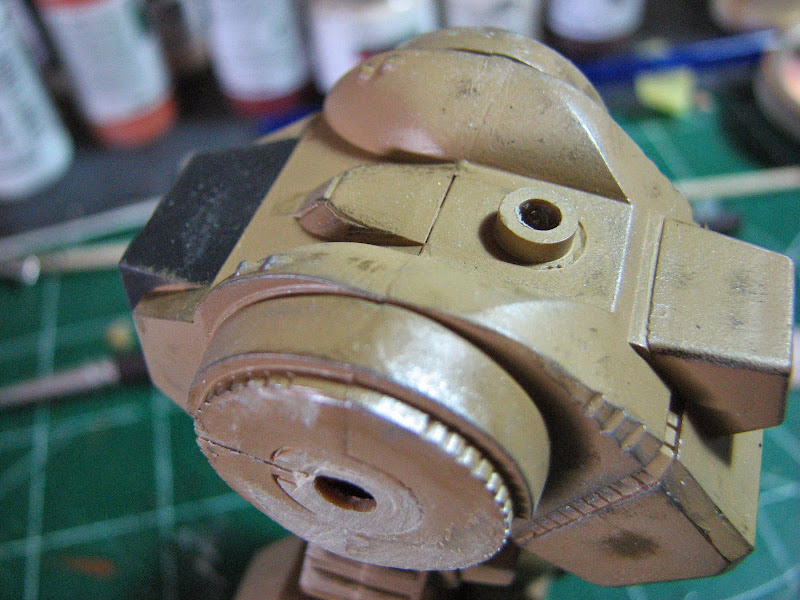 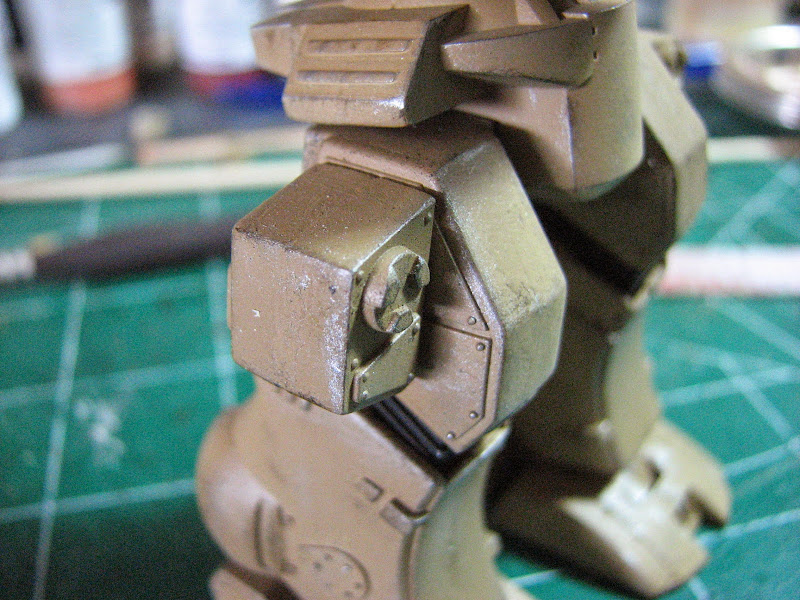 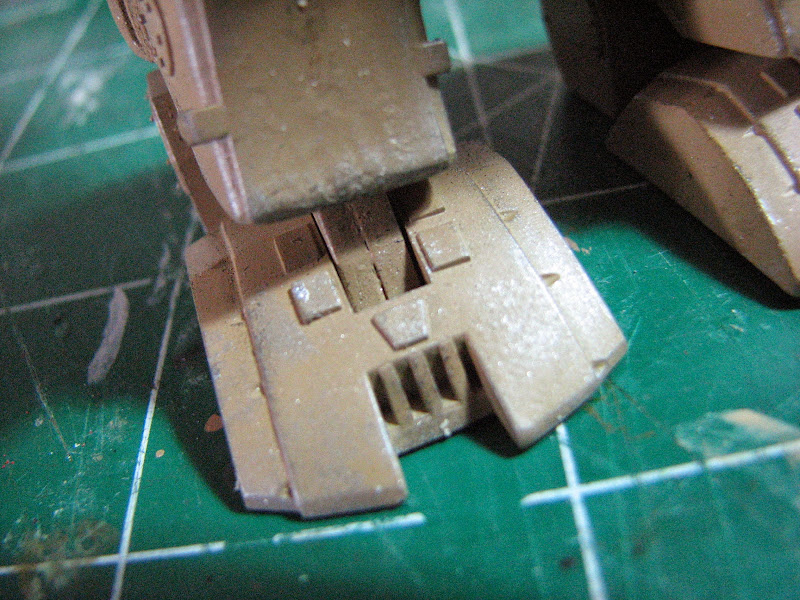 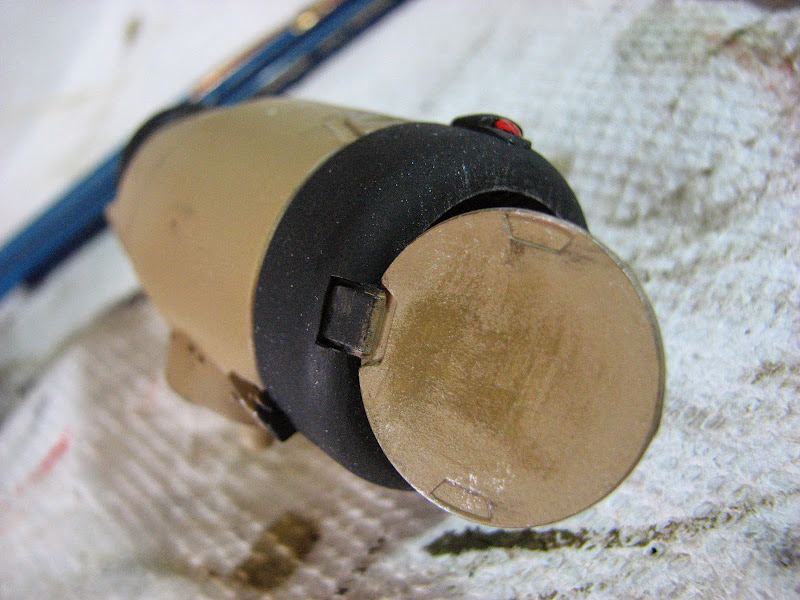 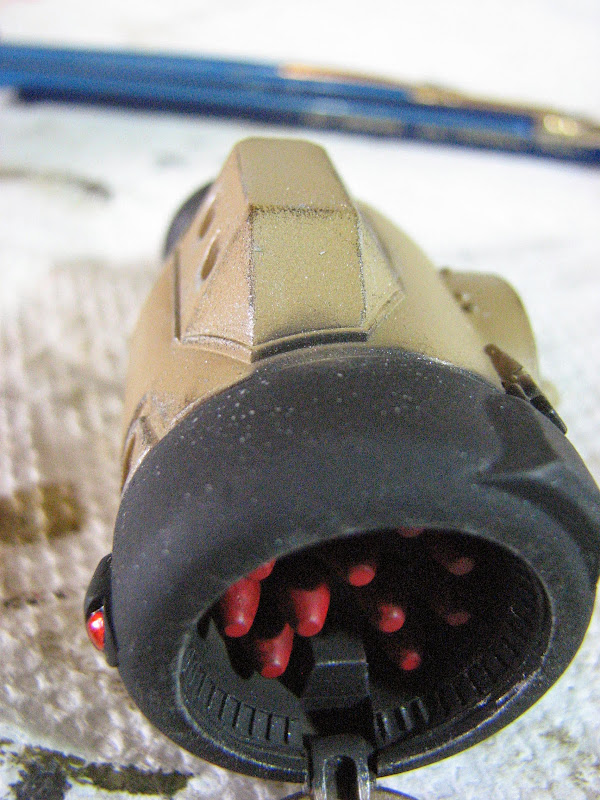 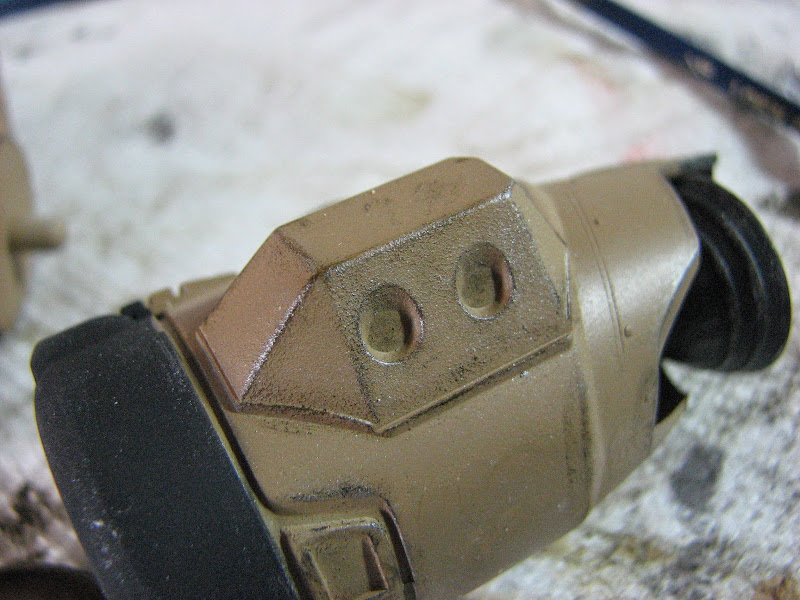 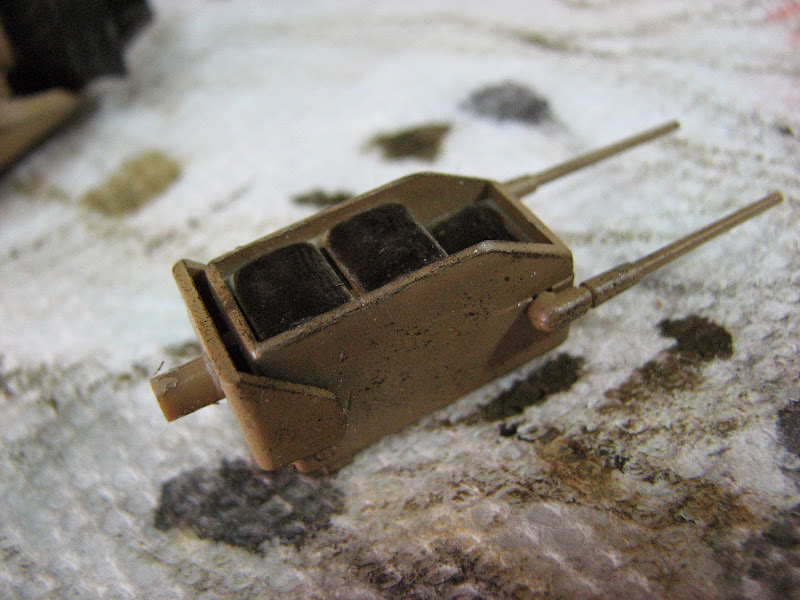 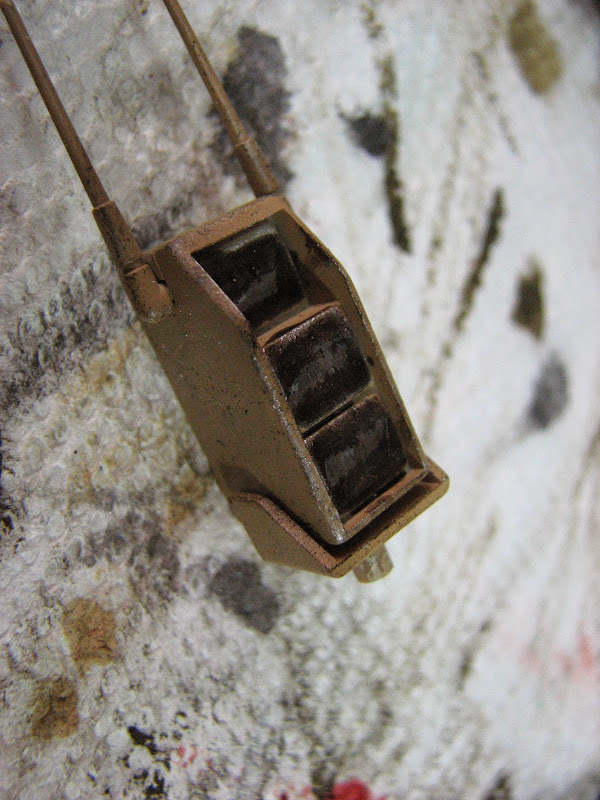 PHOTOS
didgeboy (Damon) says
This one was actually finished a while back, and to be honest, I thought I had done the final wrap up and final pics posting. My bad.

So the whole of this build was pretty mediocre. The parts fit is good, but leaves MUCH to be desired as well, with some big seams and gaps that need filling and A LOT of sanding. I did not manage to get all of my issues sanded down flat, but this was a "for fun" build, so no worries. All in all it looks good but not great. If you are looking for a "fun" build that you do not have too think too much about and can build in a day or a weekend, then yes this might be a good kit if you can find it for under $10. I am sure that with some TLC and care this could actually build up into a really nice kit, but the time and money you would spend might be better off getting that new WAVE Phalanx instead. Cheers.