You are viewing the archived version of the site. Go to modelgeek.com for the current dynamic site!
main (AeroScale) World War II

World War II
Discuss WWII and the era directly before and after the war from 1935-1949.
Hosted by Rowan Baylis

Gabriel examines the 1:48 IAR 80 from Hobby Boss and describes his build in detail.

If you have comments or questions please post them here.

REPLY & QUOTE
BEWARE OF THE FEW...

As I grow older, I regret to say that a detestable habit of thinking seems to be getting a hold of me. - H. Rider Haggard

REPLY & QUOTE
ivanhoe6 says
A REALLY nice in depth review of one of my favorite, obscure AC. Too bad about the decals though. So, who will be the first after market company to offer correct markings ? Gotta add this one to the stash !
Thanks for sharing !

REPLY & QUOTE
On the bench :
A whole bunch of figures, Too many half built kits and a (gasp) wing thing

REPLY & QUOTE
Joel_W (Joel Willstein) says
An excellent feature article for sure. The aircraft history in relation to the Allied oil field attack was something I literally knew nothing about.

Quite an in depth step by step build that is an excellent reference for those planning on building this kit, as well as a honest and thoughtful review of the Hobby Boss kit. The only AM options I would now consider a must are turned Brass MGs (my preference over other options), and a more accurate set of decals.

REPLY & QUOTE
ivanhoe6 says
I was so inspired I went (or tried) shopping for one. Squadron, Sprue Bros. and Lucky Models nobody had one ! I'll keep looking

REPLY & QUOTE
On the bench :
A whole bunch of figures, Too many half built kits and a (gasp) wing thing

Great looking model and a great time also reading the story and your tribulations during the build.
Will be looking out for the next IAR you present here.

Thanks for sharing, keep them coming!

Thank you for posting and sorry for late answer - I's still having internet access problems (!).

Ivanhoe6:
Thank you! I subscribed myself to Scale Hobbist product notification and I filled up the basket, safe this item. I will proceed to check-out when is re-supplied (it will be the third time - I missed the first shipment)

I've seen it on Amazon, though.

Joel
The praise I received here from an experienced modeler like you made my day! Thank You, sir! To be honest, I have to share credit with Rowan Baylis (Merlin) because he has a very sharp editing eye and slapped my wrist (kindly) more than once when I went wrong. I should thank him for that for sure!
The episode described in the review, together with Tidal Wave, are the pride of Romanian Aeronautics during WWII (for the period they were under Axis control). I found additional info in Squadron Signal book on Lightning. "Hutch" was the only pilot of his squadron do return home (

). He was credited, erroneously, with downing five FW 190 (at the best he can be credited with damaging two IAR-80, based on post-war analysis).
Aber makes excellent gun barrels and they're affordable.
RB Productions based in Ireland, owned by the Romanian modeler Radu Brinzan makes accurate decals for Romanian aircraft. Last time I checked his online store had no decals for early IAR-80 (see infra, addenda)

Pedro:
Thank you, sir! I'm very eager to start the new build on the same kit: after buying the IAR 80/81 book by Radu Brinzan, I discovered yet another few mistakes which I like to correct in my future build(s).

ADDENDA
As my good luck goes, I have received the IAR 80/81 book after I built the aircraft and sent the review. Oh, well...
There are a few other things you may like to consider:
- the colors I chose are quite good, the brown should be less red;
- the interior seems to have been painted with under-surface blue, not RLM02 (not 100% sure);
- the camouflage scheme should be wrap-around, with light blue only under wings and stabilizers, but not under the main fuselage;
- the number of the aircraft should be between 1 and 20, and no higher for this version. White 137 is an IAR 80A (it carries three pairs of MGs, not two);
- the yellow theater marking should by applied only under the wings, and on a longer span (one panel line more towards inside of the wing);
- the factory applied camouflage seems to have a loose pattern from NE to SW but not as broad as I sprayed them.

Thank you all!
Gabriel

REPLY & QUOTE
Gabriel
Many of my builds can be seen on YT in video format. Please check 'Panzergrau Models' Channel.

REPLY & QUOTE
MS406C (jean Barby) says
The colors should be the one of the RAF as there were used by the Romanian Air Force before and early in the war! You have put the legs covers the wrong way! Hobby Boss could and should have done a greater job considering the very good infos available with Radu Brinzan! So they have few excuses. Thanks for spending your time to share your analysis with us. I include here a pic of my IAR 80-A in 32nd from AZUR-FRROM! Cheers 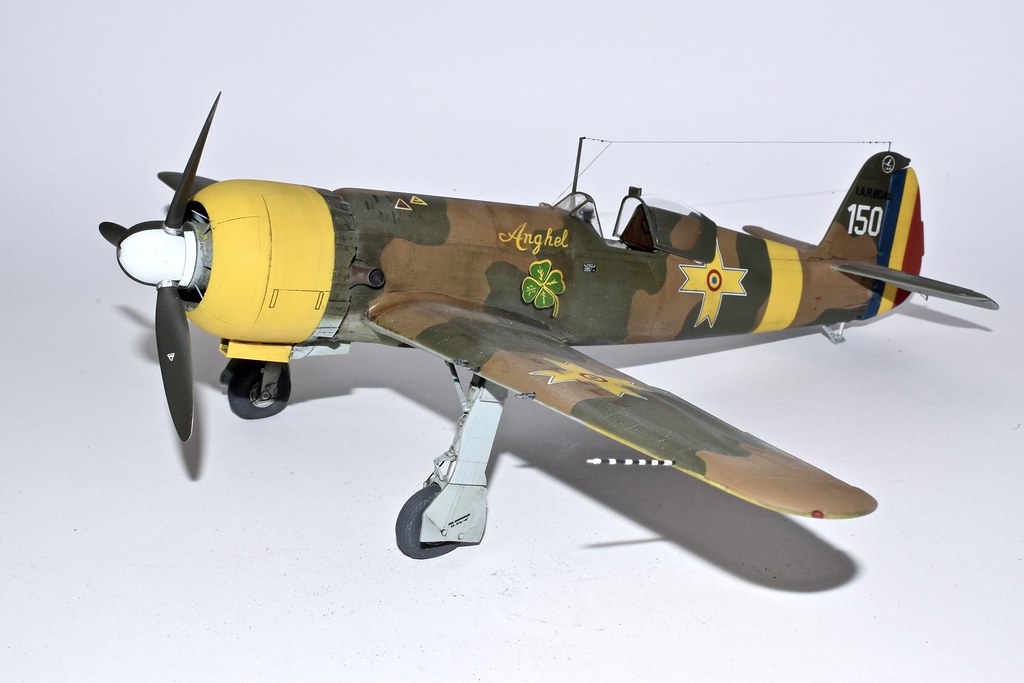 Yes, I have received Radu's book too late and I followed the instructions, safe the decal application. If you read the whole article, you'll see I made a promise to re-do the build as I have better information now. The origin of the paints is a supposition and Radu insist on that but it's the only workable hypothesis... so it's good for now. Yes, I hace installed the wheels on the wrong sides - I have noticed it later and re-installed them. Stupid mistake on my side.

The Azur kit is made in collaboration with Radu and should be much more accurate at least regarding the markings / paint scheme.

Hobby Boss are just making up their painting instructions - none of their kits I ever build have the correctly done so yes, much caution is needed. It's a shame, because the aircraft I made has a couple of very good war time pictures... well, now I know better!

Your aircraft looks superb! Rowan (Merlin) is building one right now - he has the blog running and he does also a superb job!

Thank you for tuning in!
Gabriel

REPLY & QUOTE
Gabriel
Many of my builds can be seen on YT in video format. Please check 'Panzergrau Models' Channel.