Science Fiction: Campaigns
Information and discussion of group builds and campaigns.
Hosted by Rowan Baylis
Official tread : Sci-Fi and What If VII

We are approved for another version of Sci-Fi and What-If. This is the 7th season.

Looking forward to see some great builds again this time around.

Remember any unfinished builds from the previous 6 campaigns are allowed for this campaign - even if they are more than 25% finished.

What are your thoughts and plans for your build for the campaign?

REPLY & QUOTE
Johnnych01 (John Hagan) says
Well..... I have a Panther F type which I will say is my fall back option ..... done as a late World War 2 (1947-50) what if with a matt black and 2 tone green abstract camo paint job and some additional what if tweaks .... but....
I would like to try a first genuine Sci Fi model so I will begin looking at options for that as well.

REPLY & QUOTE
RedwingNev (Neil) says
Here is my Not-My-Actual-Entry-Sharing-Out-Of-Intrest build. This is the HobbyBoss 1/48 YF-23 being painted as an in-service F-23A of the 1st TFW. As you can see I'm almost at the decal stage, just need to spray a few panels in a different metallic shade this evening. 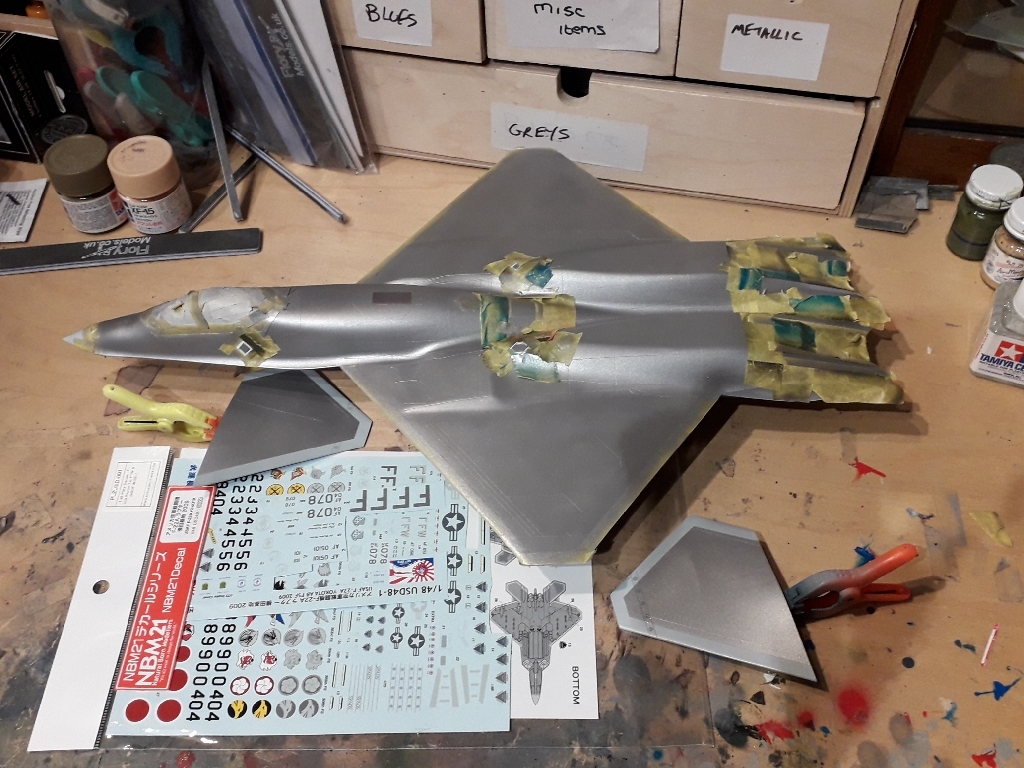 My actual entry will be the Academy 1/48 F-22, which I started maybe 10 years ago (feels like yesterday!). Originally I wanted to do this in a funky digital Japanese aggressor camo, but now I can't find the decal sheet

So instead I'm going to build it as front line squadron bird, in funky Japanese special markings. It may also get a N Korean or Chinese kill marking or two 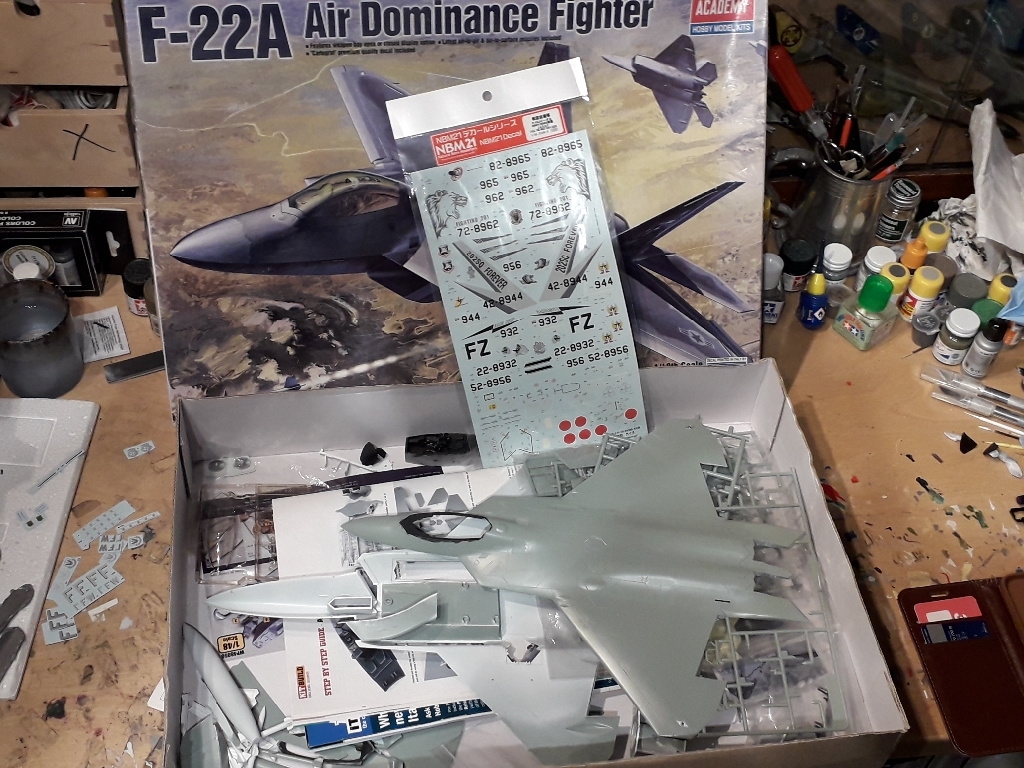 I'll be using elements from the unfinished Cantina build from the SciFi/What-if 6. I decided to drop the whole space cantina idea. That build just got bogged down and I lost interest in it.

I'll be using some of those figures for some automobile kit builds. The rest will be repurposed in to this build with some Gundam figs. The 1/24 figs work well with the gundams' size. The Gundams will not be based on canon Gundams...which I realy don't know much about anyway. I'll be using them more along the lines of WH40k styled Marines...minus the Heretical purgings.

If that doesn't work out I've got a few more ideas stashed away in the closet.

REPLY & QUOTE
Lakota (Don S) says
Alex,
I'm happy you'll continue with your Cantina figures, it looks like you put a lot of work into it. Can't wait to see them finished using your new ideas.
Take care and stay safe,
Don "Lakota"

Ive been itching to build the T95/T28 Super Heavy Tank for a while, so ill be building it for this campaign. The 105 mm Gun Motor Carriage T95 was slated for use against German defenses, then shifted for use in the proposed invasion of the Japanese mainland. This never happened, and the two prototypes were used for testing in the US/

My idea: The Manhattan project doesn't succeed and Operation Downfall was carried out in early 1946. One of the 105 mm Gun Motor Carriage T95 prototypes was operated by the USMC's 1st Heavy Tank BN which included Pershings. This T95 received some field modifications to help increase crew survivability.

This is what I'm thinking for modifications: 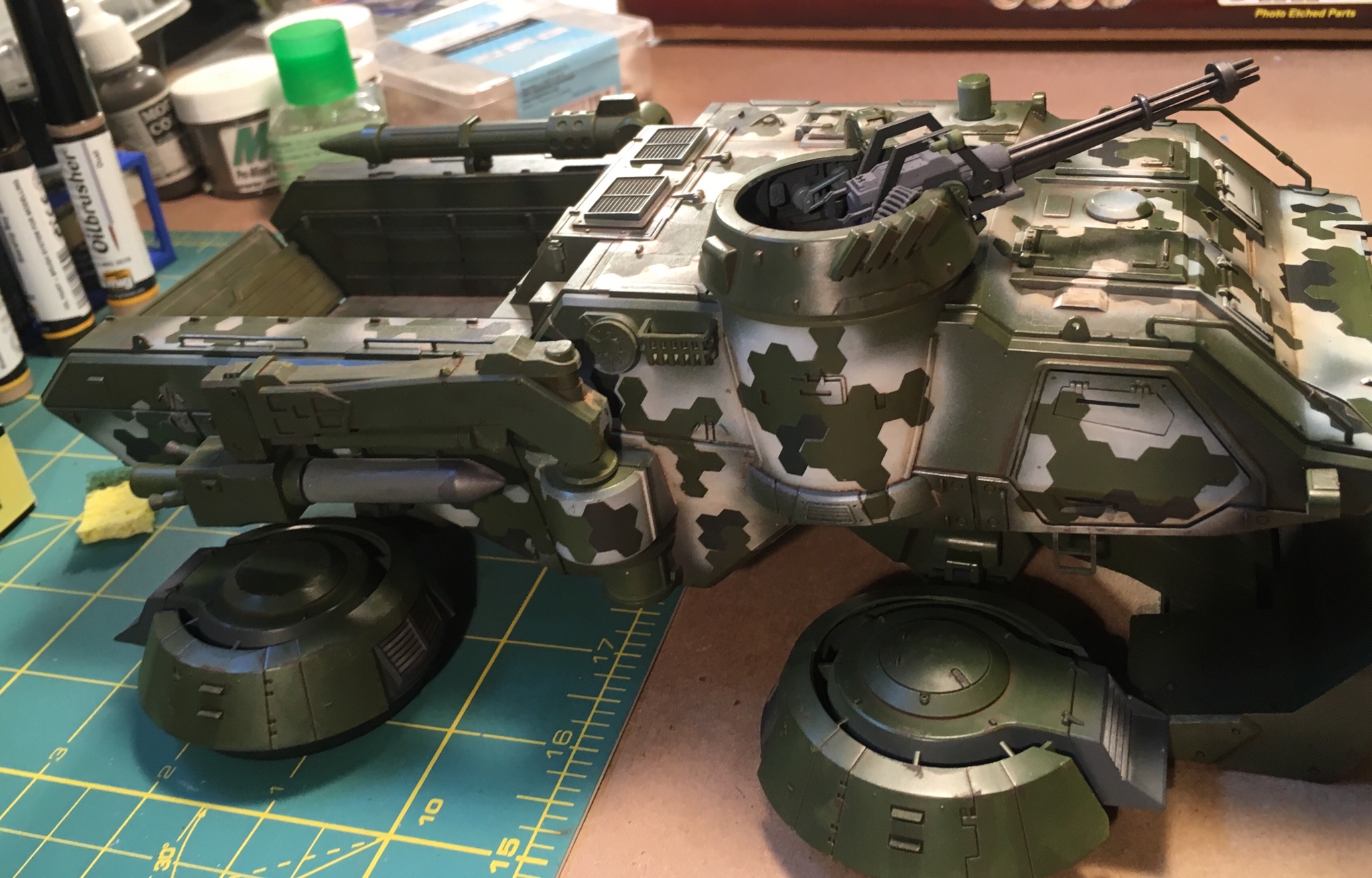 For some reason I knew you'd say that. LOL

REPLY & QUOTE
Johnnych01 (John Hagan) says
Well here is what I will be running with.

It will be done as the what if continued WW2 into 1946/47. Will be pretty much OOB with a few tweaks and an alternative camo on it.
Looking forward to seeing everyone elses now.

I did a test and the materials I'm working with an it takes tens of hours to dry (soaking process - painfully obvious).

I of course, will glad share any prize money I win...

REPLY & QUOTE
Dixon66 (David Savard) says
One more day. I'll be starting with the Hovertruck, and the workbench will be empty of other projects as of this evening.

REPLY & QUOTE
Dixon66 (David Savard) says
Jesper, Is there a gallery area yet? I couldn't find one.

REPLY & QUOTE
Johnnych01 (John Hagan) says
Jesper, Are you happy if I leave the pic that I posted above as my entry pic ?? it is still the same, bags still sealed etc or do you need a new one with todays date doing and posting ??